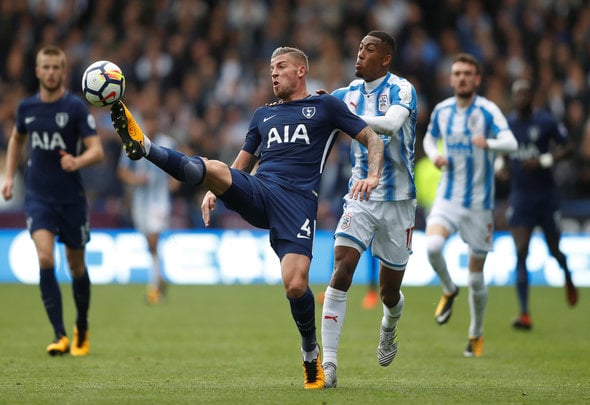 Tottenham star Toby Alderweireld is being eyed up for a transfer swoop by Real Madrid and Chelsea after he found himself snubbed from the club’s Champions League clash against Juventus, according to a report.
The Mirror claim on their website that the European giants are keeping close tabs on the Belgian international’s situation at the north London club, and Real have joined a hunt for his signing which includes Manchester City and Manchester United.
It is said that the 28-year-old was left out of the squad for the 2-2 in Turin by manager Mauricio Pochettino in order to build up his fitness after his long term absence through injury, but that the centre back felt he was ready to take part in both the Champions League clash and the north London derby win over Arsenal, which he was also left out of.
Interest from other clubs is also born from the ongoing contract stand-off between the club and Alderweireld, with the defender said to be demanding a huge new wage of around £150,000-a-week, a sum which would smash the current wage structure at the north London club.
His current deal reportedly has an automatic one-year extension set to activate next summer, which will also open a £25million release clause to suitors, hence why Spurs are keen to seal a new contract now.
Football Insider verdict
Spurs have got a really sticky situation on their hands with Alderweireld and it appears as though the way Pochettino is managing his injury situation is not helping the club’s case of keeping the Belgian in north London. The £150,000-a-week wages is something Daniel Levy will be incredibly reluctant to agree on, as it will give other players the chance to demand similar terms. The chairman is the sort of man who will ensure that no player becomes bigger than the club and the centre-back’s request will come across that way to him. With rumours of Real Madrid circling, it may well be too late to keep him anyway, and their best option now is to trigger a bidding war for his services from all the mega-wealthy clubs keen on snapping him up.
In other Tottenham news, the club are readying a trio of summer deals, including a £105,000-a-week-plus deal for a key figure.