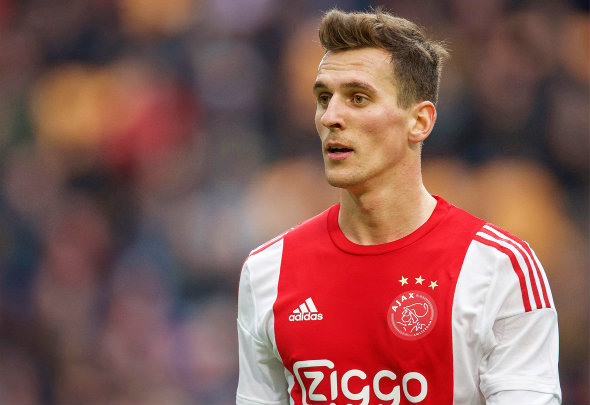 Everton target Arkadiusz Milik will not be leaving Ajax this summer, according to a report.

Dutch publication NOS have claimed that there has been a mutual agreement between the 22-year-old striker and manager Peter Bosz to ensure that the Dutch side keep the Poland international this window.

However, the report also claims that the country giants’ agreement is only for the summer window, meaning that Ronald Koeman could reignite his interest in January.

Koeman has already missed out on signing Graziano Pelle this summer after the powerful striker left Southampton and the Premier League for China, so he will be keen to ensure that he doesn’t miss out on another striker target with Romelu Lukaku’s future still in doubt.

Milik has three years left on his current deal and after appearing in five of Poland’s fixtures during the European Championships and the young striker has attracted several clubs.

The forward  impressed on the domestic scene after scoring 21 goals last season as Ajax finished runners-up to PSV Eindhoven in the Eredivisie.

Everton are said to be backing Koeman with a £100million transfer kitty and the new manager ready to make significant changes to a squad that underachieved last season.

The Dutchman has already added goalkeeper Maarten Stekelenburg and Oldham’s Chris Renshaw to his squad, but fans will eagerly be waiting a new striker to arrive at Goodison Park.

In other Everton news, Arsenal are interested in signing Juventus and Toffees target Daniele Rugani this summer.