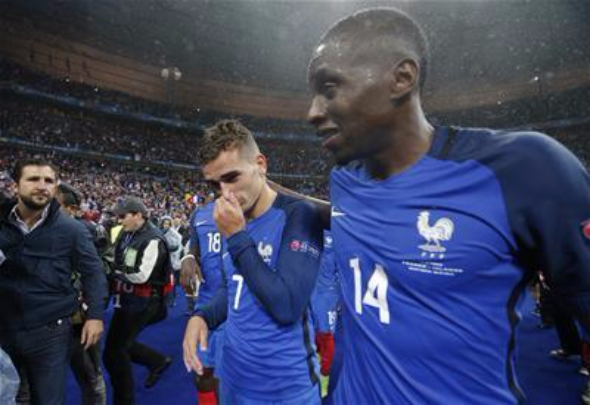 Blaise Matuidi has been given permission to leave the France squad and head to England for transfer talks with an unnamed English club, according to a report.

French football news site Goal France claim that the midfielder flew to England with the permission of both PSG and his national side in the wake of Sunday’s 5-2 win over Iceland.

Manchester United, Chelsea and Liverpool have been mentioned as possible destinations for the 29-year-old.

The central midfielder is expected to depart from the French giants this summer and it is thought that PSG have decided to let him leave following the capture of Grzegorz Krychowiak from Sevilla this weekend.

The Polish defensive midfielder has linked back up with his former boss and new PSG manager Unai Emery at the Parisian club.

Matuidi, who has two years left on his contract, has already seen his former team-mate Zlatan Ibrahimovic join Manchester United this summer and the two players share the same agent with Mino Raiola.

However, former PSG team-mate Mamadou Sakho, who Matuidi backed during the recent drugs case is currently at the Anfield club and this could be a draw for the former Saint Etienne player.

Klopp is reportedly keen on bringing in another central midfielder to the club after having bids for Piotr Zielinski and Mahmoud Dahoud rejected by their clubs.

The Ligue 1 star played in 48 encounters for the French side in the recently completed season and is currently helping his country in the European Championships with France set to face Wales in the competitions semi-finals.

In other Liverpool news, Reds target Marko Pjaca will snub Anfield this summer in favour of a move to to AC Milan.