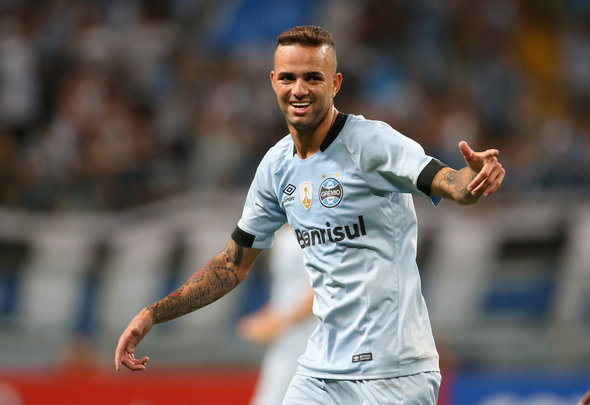 Liverpool are close to agreeing terms with Gremio for their Brazillian attacker Luan, according to a report.

The Mirror claims Jurgen Klopp has tabled a £26million bid for the 24-year-old and that Liverpool are “increasingly confident” that they’re going to land their man.

Luan turned down a contract extension offer at his club, Gremio, a month ago and only has one year left on his current deal.

Representatives of the Anfield club reportedly met with the player’s business advisor Jair Peixoto and agent Gianni Losito in April, after the pair flew to London for negotiations.

Barcelona and Brazil legend Ronaldinho has described Luan as the next big thing, and the 24-year-old was part of the side which won Olympic gold alongside Manchester City sensation Gabriel Jesus.

Luan scored in both the quarter and semi-finals, and converted his penalty in the final which helped sink Germany.

Klopp hopes that his arrival will encourage fellow countryman Philippe Coutinho to stay at Anfield, as Luan looks set to team up with his Brazilian counterparts.

Luan scored six goals and supplied two assists for Gremio in 19 Serie A games last term, and already has three goals in as many appearances in the Copa Libatadores this campaign.

He has also made six appearances for Brazil, scoring three goals.

Luan could be the next big thing, and if he is – £26million could be a steal. Despite a fairly modest goal scoring record in Brazil, the 24-year-old is exactly what Liverpool need. He is able to play on either wing, as a striker or in-behind a front man – making him perfect for Klopp’s system. He would also bring flair to a side which has lacked ingenuity at times this season, as well as bundles of pace. The Reds need more attacking options if they are to challenge for the title next season, and Luan could be the man to provide it.

In other Liverpool transfer news, this Real Madrid ace is the Reds’ top summer transfer target.