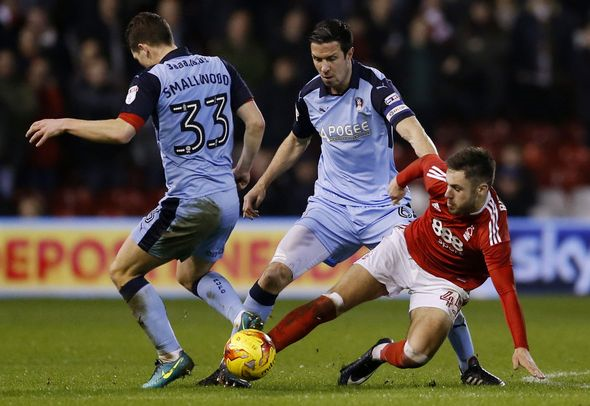 Liverpool are among a clutch of clubs beating the door down to win the race to sign Nottingham Forest wonderkid Ben Brereton, according to a report.

The Nottingham Post claim the Merseysiders are one of the elite outfits “eagerly watching the evolution” of the centre-forward, 17.

It is said there is a “concrete certainty” that Premier League clubs will test Forest’s resolve to hang on to one of the most exciting young players outside of the top division.

The Nottingham Post explain the Championship club already value Brereton at beyond £10million and “there is a strong chance that offers” will be tabled in excess of the £13million spent by Bundesliga outfit RB Leipzig for winger Oliver Burke last summer.

The interest of Liverpool and Champions League rivals Arsenal has intensified since Brereton was promoted to the Forest first team.

The young forward, who is tipped to be a future England international, was promoted to the Forest senior squad in January and has taken the Championship by storm since making his debut at the end of that month.

Brereton underlined his potential with a dramatic injury-time winner in Forest’s 2-1 win over Aston Villa a month ago and showed that was not a fluke with further goals against Fulham and Brentford.

The youngster has only made 10 senior appearances but has already accumulated three goals and two assists for a team fighting against relegation.

The Championship club believe they are in a strong position after announcing in December that the teenager had signed a new long-term contract.

Forest have cashed in on a number of outstanding academy products in recent years, with Karl Darlow and Jamaal Lascelles joining Newcastle and Burke heading to RB Leipzig earlier this season.

In other Liverpool transfer news, Chelsea have forced the Merseysiders to make a move for a 32-goal striker who is ripping up the top flight.