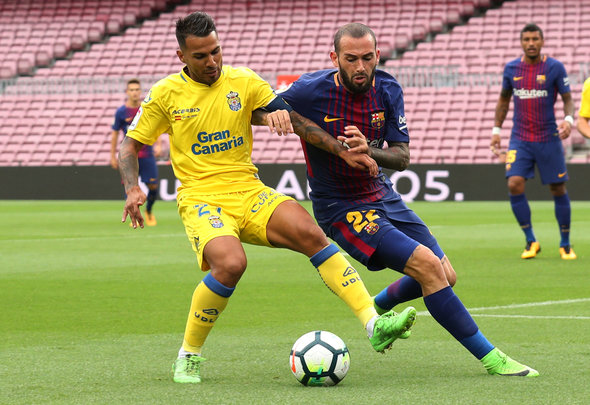 Newcastle United are keen on snapping up Las Palmas midfielder Jonathan Viera for a potentially record breaking fee in January, according to a report.
The Telegraph claim on their website that the 28-year-old Spanish international maestro, who picked up his first cap for his country back in October 2017, is available for sale from La Liga’s basement club for a fee in the region of £17.8million (€20million).
The attacking midfielder, who can operate in a central role or on either flank, impressed for the Spanish side last season netting seven goals and chipping in with nine assists across all competitions, with the Telegraph reporting that Newcastle held interest in his capture over the summer transfer window.
Despite having failed to live up to his performances of last season, with just two goals and three assists, it is said Newcastle have reignited their interest in what could be a record breaking transfer deal, with their current highest spend the £16.8million spent on Michael Owen in 2005.
Football Insider verdict
If Newcastle can secure the signing of last season’s Viera, then the £17.8million transfer fee seems like a reasonable amount for a player who could really boost the Magpies in attack. However he has failed to have had the same impact during the current campaign, which has contributed to his club sitting bottom of Spain’s top flight. The fee therefore seems too high, and with Mike Ashley at the helm, there is no chance of him splashing the cash on a 28-year-old, regardless of whether he secures the sale of the club. If the asking price drops, Benitez may look to swoop, but at the moment, this is a non-starter for the Magpies.
In other Newcastle United news, club insiders have been raving over the talents of one future star.
We’ve launched a << BREAKING NEWS FEED>> exclusively for your club. ‘Like Us’ on Facebook by clicking here if you want 24/7 updates on all Newcastle United breaking news.