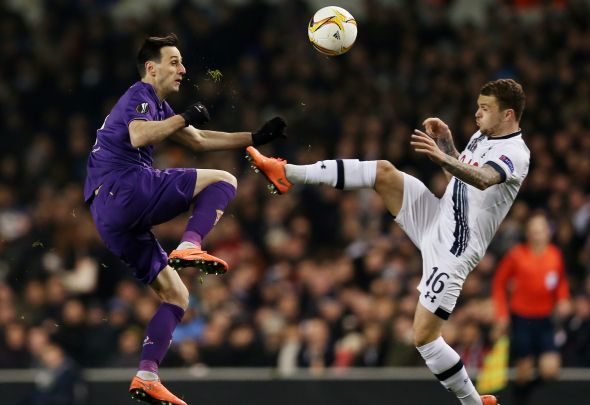 Tottenham right-back Kieran Trippier is a £5million target for Southampton, according to a report.

The former Burnley right-back deputised for Kyle Walker during his debut White Hart Lane season but was predominantly on the fringes of the Spurs team.

The Daily Star have claimed that Southampton have reignited their interest in the England under-21 international, after they tried to beat Spurs in the battle to sign him last summer.

It is said that new manager Claude Puel is interested in bringing in a new right-back and a goalkeeper to St Mary’s Stadium, with Trippier high on his target list.

The former Manchester City trainee, who joined The Citizens when he was just nine-years old, move to Spurs for £3.5million last summer and signed a five-year deal.

A £5million transfer would represent a £1.5million profit for Tottenham and their  chief negotiator Daniel Levy, the long-standing chairman.

The former Barnsley loanee made 19 appearances for Spurs last season but only six of them came in the Premier League as he played second fiddle to England star Walker.

The Saints have made two additions so far, with Norwich’s Nathan Redmond joining for around £10million while Bayern Munich’s highly-rated central-midfielder Pierre-Emile Hojbjerg joins The Saints on a five-year deal.

In other Tottenham transfer news, one of those players could be in line for a loan move to Portuguese giants Benfica.