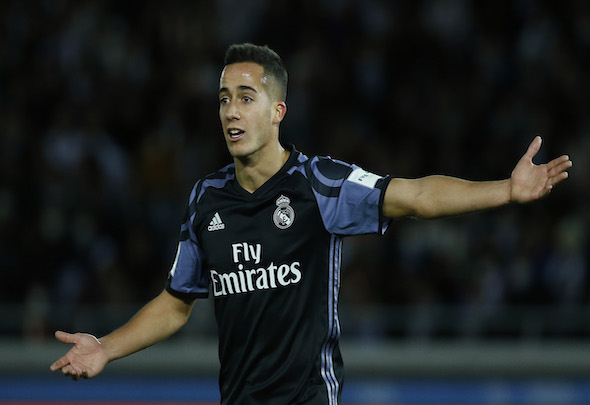 Premier League rivals Tottenham and Liverpool have both made a move to try and sign Real Madrid winger Lucas Vazquez this summer as he is desperate for a transfer move, according to a report.

Spanish sports news outlet Diario Gol claim on their website that the English pair have asked about securing the 26-year-old’s signing, with the speed machine looking for much more playing time than he is being afforded at the Bernabeu this season.

After helping the Spanish giants on the way to both a La Liga and Champions League title with 50 appearances, Vazquez has made just 19 starts from his 40 outings in the current campaign, and wants to establish himself as a mainstay at a side rather than a bit-part player.

It is said that Liverpool have been working on a move for the winger for months but that Tottenham, as well as north London rivals Arsenal and Euro heavyweights Roma are also in the running.

The prospect of having Vazquez grace the Premier League is an exciting prospect but his aspirations of guaranteed first team football are not to be achieved at either Spurs or Liverpool at the moment. The Reds have a potent attacking line and it is difficult to see the Real Madrid man usurp any of them from their roles in the starting XI, while Mauricio Pochettino has tended to avoid utilising out-and-out wingers at Tottenham in favour of a narrow attack. Plus, Spurs have just signed Lucas Moura from PSG in the January window, so unless one of their other current options departs in the summer, it seems an unlikely swoop.

In other Tottenham news, one star man is set to be left on the sidelines for the rest of the season by Mauricio Pochettino.