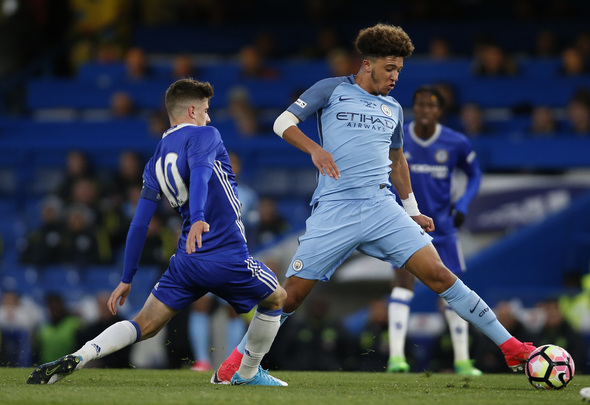 Tottenham and Arsenal are in a race to land attacker Jadon Sancho from their Premier League rivals Manchester City, according to a report.

The Independent claims that contract talks with the 17-year-old have broken down despite a stunning £30,000-a-week. three-year deal being put on the table by the Citizens.

It is understood that the attack-minded winger isn’t keen on penning a new deal with Man City as he doesn’t see a chance of earning first-team football in the near future and that he is keen on a switch to London.

The report adds that Tottenham were looking to add Sancho to the deal that saw Kyle Walker secure a big-money move to the Eithad earlier this month, but are said to have been “rebuffed” in their hopes of doing so.

Sancho was a major part of the City youth teams last season as he helped the Under-18 side reach the FA Youth Cup final, where they eventually lost to Chelsea.

Last season saw the exciting talent score 20 goals and supply eight assists in 35 appearances across all competitions with both the Under-18 and Under-23 squads.

The Independent also reports that City are sure that Sancho will not be leaving them this summer.

Sancho looks like a really exciting talent and it shows great character for him to turn down such a massive contract deal in order to pursue first-team football. He is completely right though. Academy products rarely get the chance to succeed with Man City and he has likely seen what has happened down south with Spurs and how they’ve brought through the likes of Harry Kane and Harry Winks in recent years. North London definitely looks like the place to be for Sancho, and he has a tough choice between them and Arsenal. Arsene Wenger has also shown in the past that he is keen on utilising his youth squad, so it remains to be seen which club Sancho will opt for.

In other Tottenham news, Spurs are currently strong favourites with the bookmakers to land this Serie A attacker.