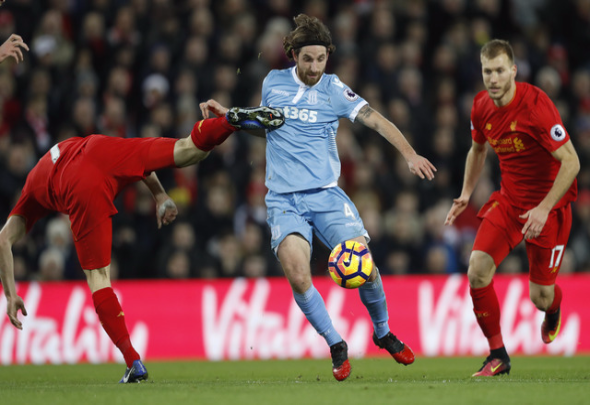 West Ham have seen £15million bids for both Bournemouth’s Harry Arter and Stoke City’s Joe Allen rejected as David Moyes rules out a move for Newcastle United’s Jonjo Shelvey, according to a report.
West Ham news website Claret and Hugh, who have established themselves as a reliable source of information on everything surrounding the club, claim that the Hammers’ top flight rivals have firmly rebuffed the offers for their midfield stars, insisting that they would not be sold to a fellow side fighting for relegation.
Manager Moyes is said be looking to bolster the centre of the park with some proven Premier League talent, but is said to have decided not to make a move for Newcastle’s pass master Shelvey, despite claims the club had held positive talks over securing his signature.
Arter has made 15 appearances for the Cherries this season, while Allen has 20 league outings for the Potters as both sides battle at the bottom of the table.
Football Insider verdict
Having two bids rejected by their rivals will come as a blow to David Moyes, but he may well have been expecting it. The sides at the botom of the table are fighting for their lives and it makes little sense they would weaken themselves by selling one of their stars, while at the same time strengthening their competition. It seemed to be a firm rejection of the Hammers’ bids from both sides, so whether they return with an increased offer remains to be seen. Meanwhile their pursuit of Shelvey was always going to be ambitious, and it is again a situation of trying to poach their competitors for some proven talent.
In other West Ham transfer news, the club are readying a £17.5million swoop for a Champions League powerhouse.