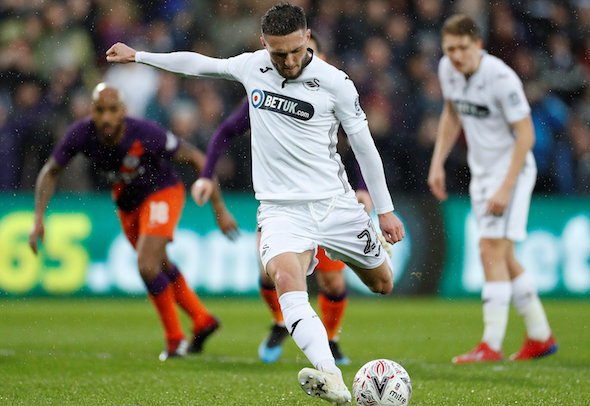 The Merseyside club have identified central midfielder Grimes and his winger colleague Daniel James as two players of great potential capable of making the step up to the Premier League.

An Everton source has told Football Insider the club have made approaches to the camps of both players and the feedback from Grimes is that he is very open to making the switch.

Swansea value the 23-year-old at around the £10million mark on the back of a season that ended with him named as the club’s Player of the Season.

The player, who had spent the previous two campaigns on loan at Northampton Town in League One and Leeds United in the Championship, made 47 appearances in all competitions and his class and composure in midfield shone in a difficult season for the club following relegation. The former England Under-21 international has a contract at the Liberty Stadium until the summer of 2022 and Everton are keen on landing hime and James in a double deal.

James, 21, is in talks to join Manchester United but a deal is not close to being finalised and that could open the door to Everton if they can convince him his development would be best served by joining Marco Silva’s side.

In other Everton news, it can be REVEALED the club are to dump big-money signing after Silva makes up his mind.