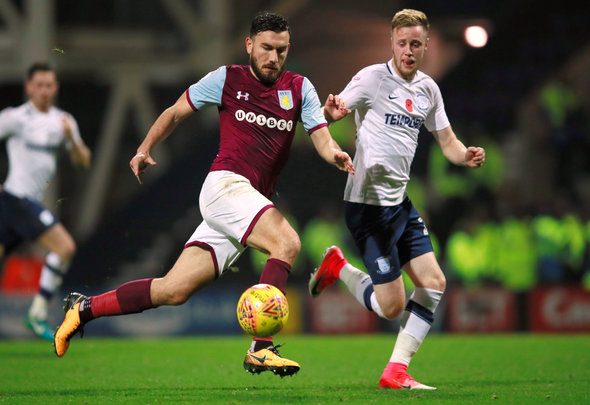 Robert Snodgrass has claimed that it was “always the plan” for him to stay on the Elland Road pitch and applaud the Leeds United fans after returning to West Yorkshire with Aston Villa on Friday.

Snodgrass, 30, is currently on loan at Villa Park from West Ham and was picked by Steve Bruce to start against the Whites on Friday night in the 1-1 draw at Elland Road.

The Scotland international spent four years on the books for Leeds before leaving in 2012 but is still held in high regard by the majority of supporters.

He was a key part in helping United earn promotion from League One in 2009/10 and made a total of 187 appearances for the club, scoring a stunning 41 goals in the process.

Snodgrass joined West Ham in January but failed to make much of an impact at the London Stadium and as a result dropped down a division to join Bruce’s Aston Villa on loan.

He has been in great form as of late and although he was on the opposing team, the winger has claimed that he would have stayed on at the end no matter what to show his appreciation to his old fans.

“That was always the plan, regardless the result or me getting booed. They were amazing with me for four years,” he said on his personal Twitter account on Friday night.

That was always the plan regardless the result or me getting booed they were amazing with me for 4 years 😘 https://t.co/3rKjVsf7Xh

Since joining the Villains, Snodgrass has made 15 appearances across all competitions, scoring three goals and supplying four assists in the process.

In other Leeds United news, fans destroyed this senior player for his performance against Aston Villa.