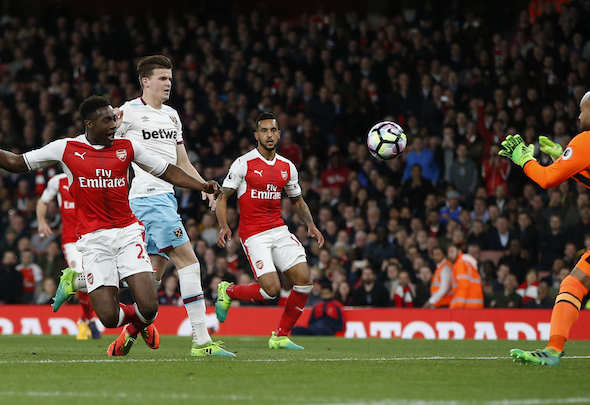 West Ham fans believes their club should cash in on defender Sam Byram on Twitter after he suffered a difficult season in east London.

Byram, 23, has endured a turbulent campaign at the London Stadium, missing 16 games between October and January in all competitions after undergoing a hamstring operation.

It has seen the likes of Michail Antonio, Havard Nordtveit and Cheikhou Kouyate all fill in on the right side of defence this season, with Alvaro Arbeloa also sidelined.

Former Leeds right-back Byram, who moved to east London in January 2016 from the Yorkshire giants, has made just 24 senior appearances for the Hammers.

With boss Slaven Bilic likely to bolster his side in the summer transfer window, if the Croat stays on in the managerial hotseat, Byram could be sold after failing to have an impact so far.

West Ham fans took to Twitter in an attempt to persuade their club to sell Byram in the summer, despite back-up Arbeloa’s contract being due to expire in less than two months.

Sell him. Think he's decent but if Bilic doesn't have any trust in him it's unfair to Byram to have him rotting on the bench https://t.co/o3oOHqDwvI

Keep all 3 and sign a starting Rb. However everyone has a price. £20 mill for either LB and £10 mill for Byram and obvs would sell

he sees them every day in training & obviously don't rate Byram so would prefer to play ANYONE else there, Byram will be sold

Byram has a contract with the Hammers until the summer of 2020, but could be allowed to leave this summer if Bilic does bring a right-back to Stratford.

In other West Ham transfer news, Bilic’s London side are eyeing a bargain £4.1million move for this Barcelona youngster but face competition from Monaco and Benfica.