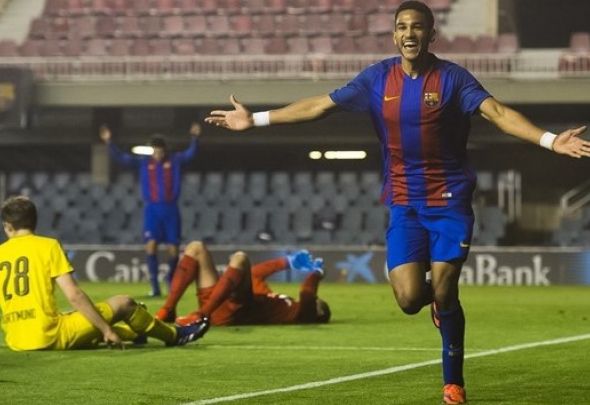 West Ham are in talks to sign Barcelona youngster Jordi Mboula for a bargain fee of £4.1million, according to a report.

The Daily Star claim West Ham are in talks to sign the 18-year-old star, who is believed to have a bargain release clause in his Nou Camp contract and has been dubbed the new Thierry Henry.

The report also claims speed machine Mboula could replace both Diafra Sakho and Jonathan Calleri, with the latter set to return to Deportivo Maldonado from his season long-loan.

It is believed that Mboula is a target for the Hammers alongside Chelsea’s Michy Batshuayi and Southampton’s Shane Long, as Slaven Bilic looks to reshuffle his options in the final third.

Barcelona could look to sell Mboula with a buy-back clause that would expire after two years, a similar deal they have in place with Everton attacker Gerard Deulofeu.

Spain Under-19 international Mboula has caught the attention of the east London club after starring in the UEFA Youth League this term, scoring eight goals in nine games for Barca.

However, with only 12 months left on his current contract, Mboula is interesting both Benfica and Monaco but could be the next new face at the London Stadium.

Mboula would be a top signing, and could spark a change in West Ham’s transfer policy. The Hammers are known for their preference in signing players who are in the prime of their careers, but signing 18-year-old Mboula could see them unearth a hidden gem for a bargain fee should he be brought to east London. If he does turn out to be success, West Ham’s top-ranking officials could leave behind looking to sign older, proven players and instead copy Bundesliga giants RedBull Leipzig’s blue print of targeting young starlets that are unproven at top-tier level.

In other West Ham transfer news, this 27-year-old could rejoin his former side after a disappointing season.