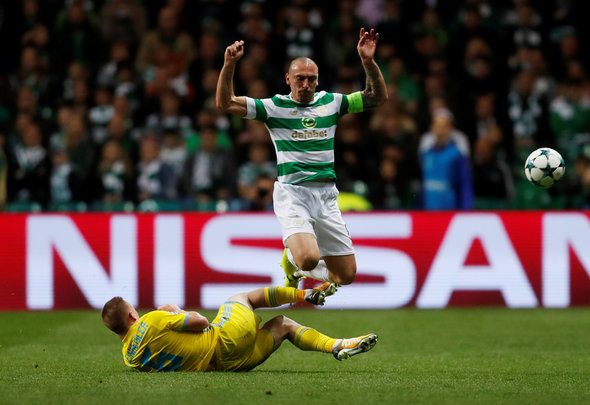 Scott Brown has claimed that he knows exactly how Rangers will approach their clash with Celtic when the two Old Firm rivals come to blows at Ibrox on Saturday afternoon.

The Hoops have been in commanding form against their bitter Glasgow rivals ever since they returned to the Scottish Premiership last year, winning all but one of their six encounters throughout their undefeated 2016/17 domestic season.

Celtic captain Brown, 32, is a veteran of the Old Firm derby and will no doubt be the focus of some controversy during the 90 minutes on Saturday.

However he believes that he and his team-mates know exactly how Rangers will set up against his side in order to try and end their unbelievable unbeaten streak.

“Rangers will try and press us but we are stronger and fitter than last season so we are relishing the game,” said Brown in a pre-match press conference on Friday afternoon, as quoted on Celtic’s official Twitter account.

💬 SB: "Rangers will try and press us but we are stronger and fitter than last season so we are relishing the game."

Brown is a true hero of the Parkhead faithful, mainly for the way that he has been able to consistently turn up to the big occasion when playing against Rangers.

His hard work has largely gone under the radar due to the sensational form of the attacking players that Brendan Rodgers has at his disposal, but few can underestimate the energy and drive he brings to his team when playing in the midfield.

The Scotland international has made 14 appearances across all competitions this season and played every minute of the Bhoys’ league campaign.

In other Celtic news, there has been a major injury blow ahead of the Hoops’ upcoming big fixture.