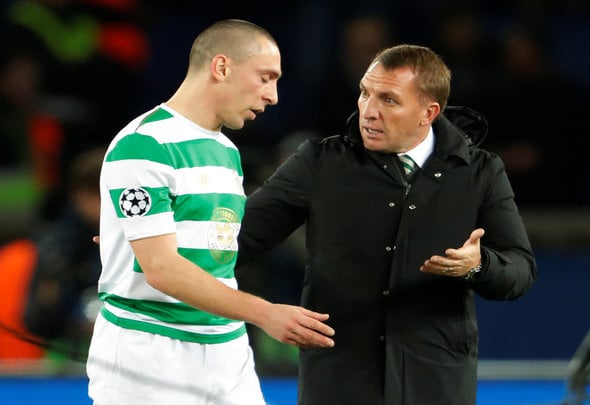 Celtic captain Scott Brown has been discussing how he isn’t looking forward to life after football.
The 32-year-old still has a few years left at the top of the game, but he accepts that time is running out on his career.
“I think that hardest thing is not being in a dressing room with 20 lads and having the banter at training and losing a winning mentality” Brown said, as quoted by the Evening Times.
“One day I could be training with the lads and the next day it’s the end of the season and you’re retired. For now I will enjoy every moment and play with a smile on my face because I know it might not last that long.”
Brown has been an almost ever-present in Brendan Rodgers’ side since the Northern Irishman took over as Celtic manager in May 2016.
After Brown’s career looked like it might be coming to an end due to injuries, Rodgers revitalised him and Brown is arguably the most important player at Celtic Park.
Last season he lead the Hoops to their first domestic treble since 2001 and first unbeaten league season since the 1890s, and earlier this season he helped the Bhoys set a new British domestic record of 69 matches without defeat.
He has won 14 trophies, including seven league titles in his time with the Bhoys and will go down as one of the most successful captains in the club’s history.
When the Bhoys return from their winter break in Dubai they return to domestic action as they begin their defence of the Scottish Cup and quest for back-to-back domestic trebles with a match against Brechin City.
In other Celtic news, Brown has fired back at his critics
We’ve launched a << BREAKING NEWS FEED>> exclusively for your club. ‘Like Us’ on Facebook by clicking here if you want 24/7 updates on all Celtic breaking news.