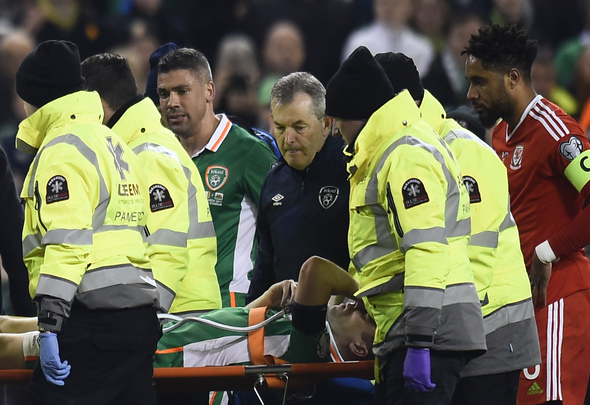 Irish striker Shane Long has revealed that Aston Villa’s Neil Taylor was in tears after his reckless lunge left Seamus Coleman fighting for his career.

The 28-year-old was shown a straight red card by the referee in the second half of Wales’ goalless draw with the Republic of Ireland after his ugly lunge left Coleman’s leg with a double break.

In the aftermath of the challenge, Coleman was given oxygen on the pitch and had to be stretchered off after viewers were left horrified by what they had saw.

TV producers opted not to show replays of the 69th minute incident in what was a crucial 2018 World Cup qualifier in group D.

Long refused to defend Taylor for his robust challenge but he added that it clearly wasn’t his intention to cause harm to the Everton right-back.

“I think he had it done to him before so I suppose he went in worried himself in to the challenge,” said Long to RTE Sport.

“He caught him high. I think he was in tears afterwards.

“He knows the pain Seamus is in because he’s been there before. It was a horrible challenge, there’s no defending it but I don’t think he meant to do it.”

Taylor has also suffered a terrible injury in his career during his time at Swansea after he fractured his ankle in multiple places in 2012.

The 38-time Wales international was also given oxygen on that occasion and had to be stretchered off the field.

He will now be suspended for Wales’ upcoming qualifiers against Serbia, Austria and Moldova.

Coleman is now set to face a lengthy spell of rehabilitation before he can return to playing for both Everton and Ireland.

In other Aston Villa news, fans have reacted on Twitter to Saturday night’s incident.