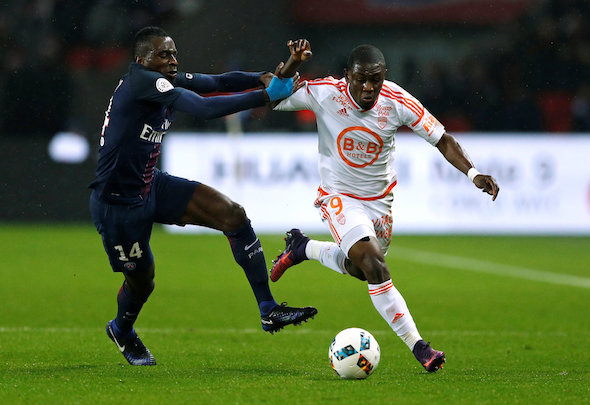 West Ham are in talks to sign Lorient striker Abdul Majeed Waris, according to a report.

Sky Sports claimed in their live transfer blog on Wednesday [02:06pm] that Waris, 25, had jetted into London to negotiate a switch to the Premier League side who are in desperate need of reinforcements after a dreadful start to the campaign.

Waris scored 11 goals in 40 appearances across all competitions for Lorient last season as they suffered relegation from Ligue 1.

The 25-times Ghana international is yet to feature this term for Lorient, having failed to be named in the match day squad for any of their seven opening fixtures.

It is understood that West Ham are looking at Waris as a replacement for injury-hit Diafra Sakho after the Sun reported that the Senegalese forward was on the verge of signing for Rennes in a deal worth £9million.

The Daily Mail has recently reported that Burnley were closing in on a £9million move for Waris, however it remains to be seen how much the Hammers are prepared to splash on the Ghanian forward.

This deal for Waris looks like something that West Ham have done in the past and failed to find any success with. Sakho was plucked from a relatively unknown French club, did well for a bit, but ultimately injuries got the better of him. Waris will be coming to the London Stadium without an impressive goal scoring record like Sakho did and it is strange that Slaven Bilic sees him as a direct replacement. Newcastle’s Dwight Gayle could be available on the cheap at the moment but it seems that the Hammers have fell into an old habit of buying from abroad once again.

In other West Ham news, this experienced international enforcer is wanted by the Hammers but is in talks with one of their Premier League rivals.