Charlie Nicholas believes that Celtic will be dumped out of the Europa League when they travel to Zenit St Petersburg for the second leg of their last-32 tie on Thursday night.
The Hoops hold a 1-0 lead going into their visit to Russia, but Nicholas has predicted that Roberto Mancini’s side will walk away 3-1 winners, boldly claiming that centre-back Branislav Ivanovic will be the first goalscorer.
Celtic commanded the first leg in Glasgow last week.
Brendan Rodgers’ men were the best side from start to finish and grabbed a deserved winner when Callum McGregor smashed home a perfect ball into the box by Charly Musonda.
Rodgers rested a bunch of players on Sunday in the 0-0 draw with St Johnstone, meaning that the Bhoys should have a well rested first-team squad for the clash against Zenit.
However Nicholas does not believe that will be enough for the Scottish champions to book their spot in the last-16 of the competition and has suggested that the super cold climate in Russia will play a major role.
“I have to admit Celtic’s defensive structure, which had been all over the place, looked excellent last weekend to go against my prediction that they’d lose the first leg,” he said on the Sky Sports website.
“Plenty of my friends point out that Zenit haven’t played in months but more importantly Celtic showed they do have Plan B in European games when they know they’re not going to dominate the ball.
“People might think us Scots are okay with the weather over there but the conditions are a different level of cold and I’m afraid I’m going for a tough night for the travellers and another Celtic defeat.”
Nicholas believes Ivanovic will get the first goal, but the former Chelsea defender has struggled for fitness as of late and did not play in the first leg.
He has made 27 appearances in all competitions, scoring three goals, which suggests that the Sky Sports pundit’s claim is quite the longshot.
In other Celtic news, the Hoops made a huge transfer decision on this international attacker from these top-flight runners-up.
Don’t miss out on breaking and exclusive Celtic news by clicking here for our brilliant 24/7 updates on Facebook, Instagram and YouTube. 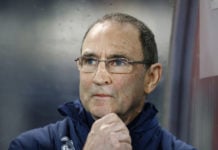