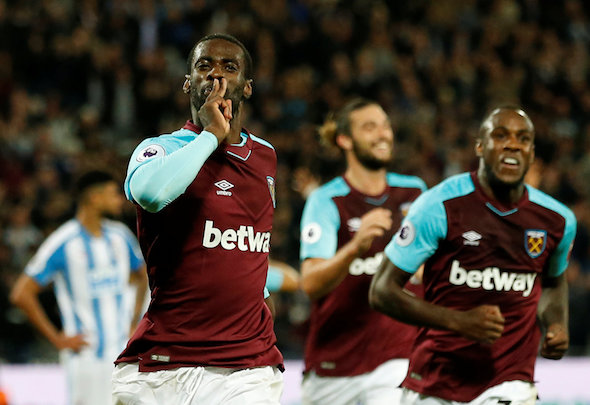 EXCLUSIVE By Pete O’Rourke
West Ham midfielder Pedro Obiang is set to miss the rest of the season with a knee injury, Football Insider sources understand.
The central midfielder suffered medial knee ligament damage in last weekend’s FA Cup defeat at Wigan Athletic after a forceful challenge from Max Power.
The 25-year-old key man was stretchered off as a result of the challenge and West Ham’s worst fears have been confirmed with Obiang suffering ligament damage to his knee.
A well placed source has told Football Insider that Obiang faces up to between three to four months out of action which will end his season.
The news is a major blow for West Ham boss David Moyes as he is already facing an injury crisis at the London Stadium with as many as 13 first-team players on the sidelines through injury.
Moyes was already looking for midfield reinforcements during this month’s transfer window, but Obiang’s injury will only increase his need to bring in at least one new midfielder before the transfer window closes on Wednesday.
In other West Ham team news, Football Insider can reveal that the club have accepted a £16million bid for 28-year-old first teamer and the deal will go through by Wednesday night.
We’ve launched a << BREAKING NEWS FEED>> exclusively for your club. ‘Like Us’ on Facebook by clicking here if you want 24/7 updates on all West Ham breaking news