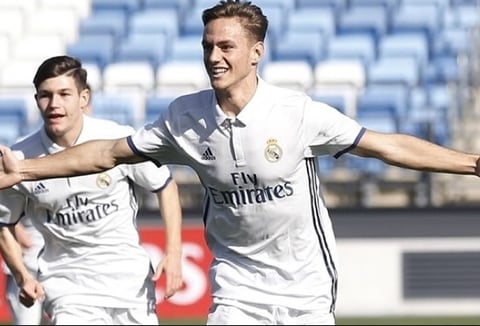 Celtic summer interest Dani Gomez could soon be on his way out of the Bernabeu after the striker was dropped from Real Madrid’s B-team after he refused to sign a new deal with the Spanish giants, according to a report.
The Scottish Sun revealed that the 19-year-old forward has been dropped from Real Madrid’s B-team, while Marca suggests his omission from the side could mean the youngster will be available for a cut-price, and that he won’t play again until his contract situation is resolved.
The striker scored 32 goals at Juvenil A level but has failed to make a start in the last five games and has not played in the last two.
According to the Sun there was interest from the Scottish Premier League champions last summer but a £3m deal never materialised.
However, it would now appear that Los Blancos might now be willing to let Gomez leave.
Football Insider verdict:
It sounds a certainty that Gomez will be shown the exit door at Madrid. A no-show in the last two games and no interest in signing a new deal has seemingly spelt the end for the forward, which bodes the question – where will he go next? Celtic were linked to the striker in the summer transfer window with figures of £3million being mentioned but nothing came to fruition. Brendan Rodgers has proved himself to have a real knack at working with blooding young players so the young Spaniard would be given the opportunity to flourish in Scotland. This could be one to watch in January, especially if Moussa Dembele were to leave.
In other Celtic news, UEFA name defender as one to watch in 2018.
We’ve launched a << BREAKING NEWS FEED>> exclusively for your club. ‘Like Us’ on Facebook by clicking here if you want 24/7 updates on all Celtic breaking news.