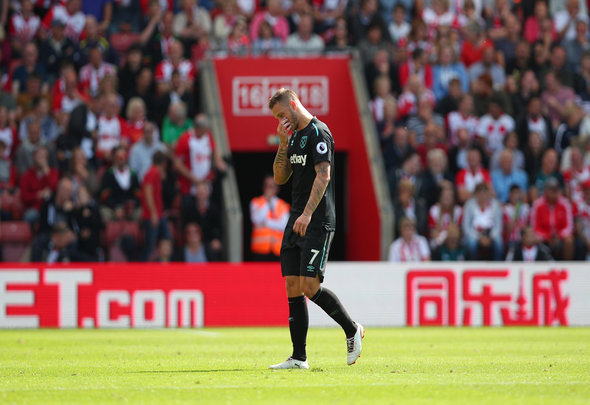 Marko Arnautovic has spoken candidly about his performances this season vowing that he wants to do better for West Ham and change the club’s fortunes.

In an interview with the official club site, the winger failed to crack a smile as he spoke about how his season is going since joining the Hammers in the summer.

“I want to change this situation around, I want to do way better,” revealed the 28-year-old.

“I don’t want to put myself in the corner and say ‘no, I can’t do this’ or go home and cry because I’m not putting in the performances.”

The Austrian international has featured 12 times for the Hammers across all competitions but has failed to score any goals for the club.

However, the 28-year-old has racked up two assists in two League Cup games for the Hammers on the bright side.

Arnautovic signed for West Ham for a club record fee of £20million from Stoke City in the summer, where he signed a five-year-contract with the club.

Last season for the Potters, the attack-minded player scored seven goals in 35 outings across all competitions and registered six assists.

David Moyes will be hoping for the winger to get similar numbers now that the Scottish manager has arrived at the club, tasked with stopping the Hammers from getting relegated.

West Ham are 19th with 10 points from 14 games, and have a game over 18th placed Crystal Palace.

The Hammers play that game on Sunday when they face undefeated league leaders Manchester City.

In other West Ham news, former Hammers boss Alan Curbishley has delivered his verdict on the appointment of Moyes.