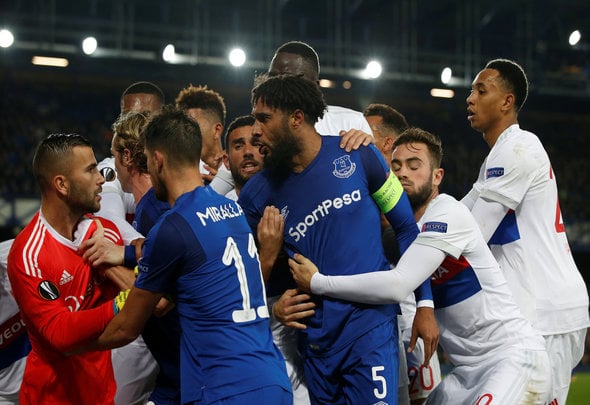 David Unsworth has opted to name Ashley Williams as Everton captain for the Europa League game against Lyon, and fans are not happy.

The caretaker manager announced the decision after confirming Leighton Baines, Wayne Rooney, Michael Keane and Phil Jagielka had been left at home instead of making the trip to France.

The 33-year-old centre back joined the Toffee from Swansea back in 2016 with Sky Sports reporting the fee at the time as roughly £12million.

The defender has played 17 times this season across all competitions scoring one goal.

The Welsh international’s one goal actually came in the first Europa league game against Lyon at Goodison Park.

It’s worth noting that in the same game, the defender was credited with starting the brawl that caused chaos on the pitch.

Williams was a regular for the Toffees in the his first season at the club in the 2016/17 season, making 39 appearances, scoring one goal and registering one assist.

Fans were not happy about the decision, believing the player has not played well enough this season to be picked let alone made captain and took to Twitter to voice their anger:

I’m sorry but Williams should be nowhere near the team never mind captain! Terrible decision by Unsworth

'Ashley Williams set to captain the side tomorrow night'

Anyone want to buy a return flight to Marseille and train ticket to Lyon?

He's a million miles from deserving a shirt, never mind an armband.

In other Everton news, there will be a swift final decision made in the Toffees’ pursuit to replace Koeman after this 43-year-old was offered a deal.