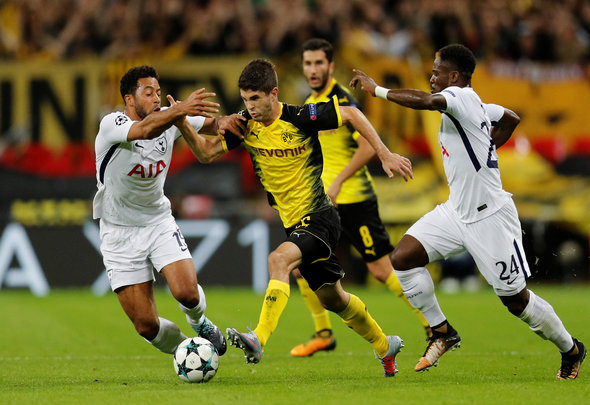 Tottenham will have to fight the likes of Real Madrid to secure the signing of Borussia Dortmund’s young star Christian Pulisic, according to a report.

Football transfer news website transfermarketweb.com claim that the Spanish heavyweights, as well as Spurs’ North London rivals Arsenal, have joined the hunt for the 19-year-old attacker, with Mauricio Pochettino’s side said to have already been tracking the youngster.

Despite his age, Pulisic has become a key player for both club and country, with seven goals in 16 appearances for the United States.

As for Dortmund, he has already turned out 64 times for the German giants, having made a sensational rise through the youth ranks with BVB, scoring 10 times and notching up a further 14 assists.

Contracted to the club until 2020, there are a host of sides circling for his signature, with former Dortmund boss Jurgen Klopp also reportedly looking to bring his former player to Liverpool.

News of Real Madrid’s interest in Pulisic will come as a big blow to the likes of Tottenham as well as the other English sides, as the Spanish giants would be a tough offer to turn down. However, Mauricio Pochettino must keep faith if he is serious about bringing the 19-year-old sensation to the club. Spurs would likely be able to offer Pulisic more playing time in the first team, while he would be playing alongside the likes of fellow young stars Dele Alli and Harry Kane. It would be a tough battle, but if they could pull a move off, they would secure themselves one of Europe’s brightest talents.

In other Tottenham news, Football Insider has picked out three stars who must be axed for the club’s clash against Huddersfield.