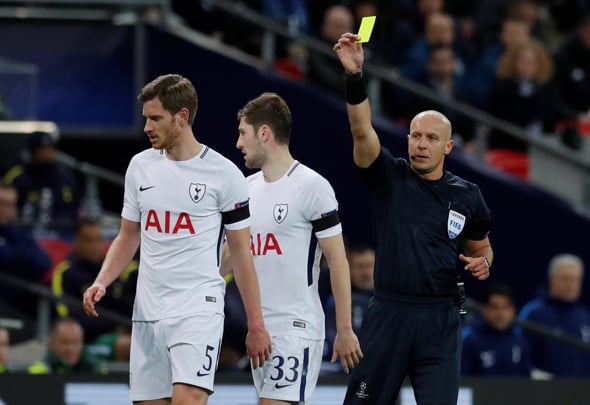 Tottenham played an absolute blinder in the first 45 minutes at Wembley, but lost out in the second-half to two quick-fire goals in a heartbreaking defeat.

Spurs led 1-0 at half-time but they were lucky to get away with what was a clear penalty.

Jan Vertonghen brought down Douglas Costa in the first-half, in a rash challenge, but the foul wasn’t given despite it looking a stonewall.

And Vertonghen was perhaps fortunate to be on the pitch after another rash challenge brought him a yellow card in the 28th minute.

That would have changed the complexion of the game massively but it would have been unfair on Tottenham, who were the best team and good value for their 1-0 half-time lead.

In-form player of the moment Heung-Min Son got the Tottenham goal after threatening earlier, and he paid his manager back for selecting him ahead of Erik Lamela.

However, the second-half didn’t go to plan at all, and two quick-fire goals from Juventus turned the game on its head, with Kane coming oh-so close at the death to get an equaliser.

At the heart was an uncharacteristically shaky performance from Vertonghen and Spurs fans took to Twitter to let the world know.

Here are the best reactions from Tottenham fans:

Worst player so far has probably been Vertonghen. Not that he’s been bad but everyone else has just been superb

Vertonghen babe – you are overly triggering me in this game!!! #Spursdontlosefocusplease #TOTJUV

Indeed we have. Although arguably should have had penalty for shirt pull on Vertonghen and Juve should be down to 10 for deliberately standing on Son

Vertonghen is shit so far

Vertonghen has been uncharacteristically eager to go to ground so far. Needs to very careful now #COYS

Poch needs a word with Vertonghen at half time.

He’s been very naive for arguably the biggest game he’s played for @SpursOfficial.

I’ve been impressed with Sanchez, very good at reading the game and sensing danger.