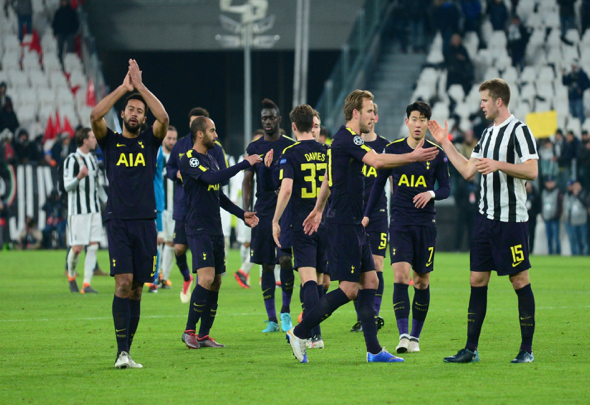 Tottenham pulled off a fantastic comeback at the Allianz Stadium on Tuesday night to give themselves a fantastic shot of making the quarter-finals, and while fans were delighted, they weren’t happy with the display of Eric Dier.
Spurs went two goals down early on as Gonzalo Higuain punished them twice, once after latching onto a free-kick with the Tottenham defence seemingly asleep, and then from the penalty spot.
Harry Kane pulled one back in the first half before Higuain missed a penalty that would have netted him a first-half hat-trick.
And Spurs punished him in the second half, when Christian Eriksen cooly slotted home a free kick, driving the ball low to Gianlugi Buffon’s right.
It makes Spurs the favourites to progress with the second leg to be played at Wembley on March 7, but Tottenham fans weren’t pleased with everyone on Tuesday, despite the result.
Eric Dier came in for sustained criticism, with one fan saying that he gave the ball away too many times.
Here is a selection of the best reactions from Tottenham fans to the young midfielder:

I can go with that but I thought Sanchez got pulled out of position having to cover Aurier on occasions.
Dier gave the ball way too many times tonight.

What does Eric Dier do, always missing in midfield. Dembele been playing alone for the past 3 matches.

Our fullbacks were below par, Dier wasn't at his best and Kane was not at it, though he still scored.

Eric Dier is still a liability because he gives the ball away in his own half at least once a game. Discuss.

https://twitter.com/Jack_Flav/status/963529229374836741
In other Tottenham news, Rio Ferdinand slams Tottenham star he has ‘never rated’ after 2-2 draw with Juventus
Don’t miss out on breaking and exclusive Tottenham news by clicking here for our brilliant 24/7 updates on Facebook, Instagram and YouTube.