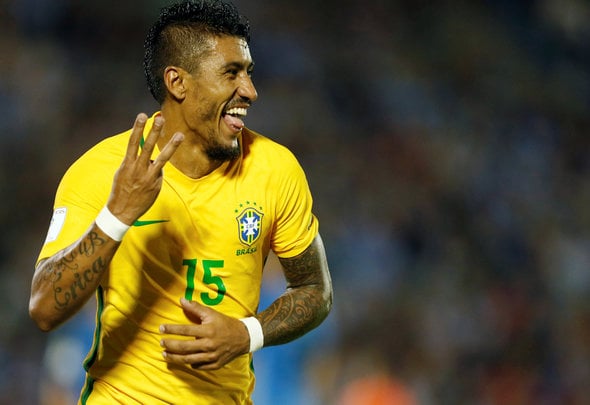 Former Tottenham midfielder Paulinho scored a hat-trick for Brazil in a World Cup qualifier – and the club’s supporters were shocked on Twitter with his goal scoring exploits.

The 28-year-old spent a couple of seasons with Spurs before leaving White Hart Lane in 2015 for Chinese club Guangzhou Evergrande.

The combative midfielder scored 10 goals in 67 appearances for the north London club and was more recognised for his steady work in the centre of the park.

However, he scored a surprise hat-trick in Brazil’s 4-1 win against South American rivals Uruguay.

Spurs fans were stunned with Paulinho’s performance for Brazil and were questioning why he couldn’t perform like that in English football.

Paulinho!!!!! Never did that for spurs 🙁

Thanks for never playing like this for Spurs Paulinho. We appreciate it. 😐

Paulinho is unstoppable for #brazil why couldn't he play like this for spurs?

Paulinho with 2 goals for Brazil. Baffling what happened to him at Spurs

Paulinho is now one of several former Premier League stars plying his trade in the Chinese League and that has helped him maintain his place in Brazil’s national side.

He has managed to add more goals to his game in China, scoring 21 goals in 74 appearances for Guangzhou Evergrande.

However, Mauricio Pochettino would surely love to have more goals from the midfield to help lift the burden on attackers Harry Kane, Dele Alli and Christian Eriksen.

In other Tottenham news, Martin Keown has delivered his verdict on Eric Dier.