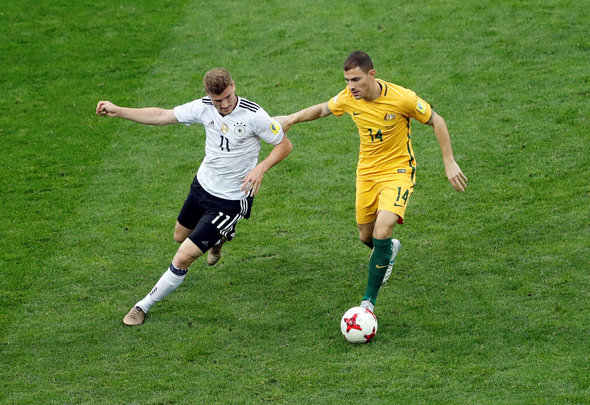 RB Leipzig striker Timo Werner was the star man for Germany on Sunday – and Tottenham fans have urged their club to move for him in the summer transfer window.

The 21-year-old starred for Joachim Low’s side as they beat Cameroon 3-1 in the Confederations Cup.

The forward scored twice in the second-half and helped his team set up a semi-final clash with Mexico.

Werner has broken into the senior Germany side in 2017 and his brace against Cameroon were his first two senior international goals.

Spurs fans were impressed with the youngster and feel that he could be a great addition to the their squad ahead of next season.

We should be all over Timo Werner #COYS

What a great striker Werner is. He would be great backup for Kane. An avenue @SpursOfficial should certainly look into #COYS

Would take Werner at Spurs, boy has potential @SpursOfficial get it done 👀 #COYS

Tah-Son and Werner link needed at Spurs next season imo

That Timo Werner banging in goals for Germany 🇩🇪, That's the guy #THFC have been strongly linked with for the last 3/4 windows 🤔

Just imagine our two strikers being Kane and Werner

Spurs could be looking for additional support in the attacking areas, with Vincent Janssen struggling to make an impact at the north London club last season.

Harry Kane remains the first-choice striker for Mauricio Pochettino’s side, but they will be keen for some genuine competition to his starting position.

The prolific forward made 32 appearances across all competitions for the German club, scoring 21 goals and supplying seven assists in return.

He has already racked up 126 top-flight matches in the German league during spells with RB Leipzig and former club Stuttgart, making him an experienced player for a 21-year-old.

In other Tottenham transfer news, Borussia Monchengladbach are lining up a move for the club’s 23-year-old.