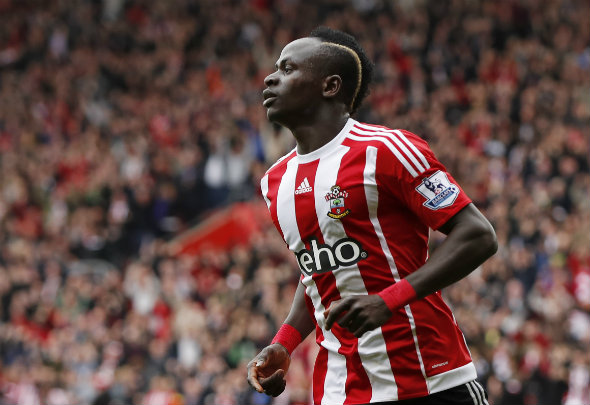 Tottenham will have to fight off Liverpool and Manchester United for the signature of Southampton’s Sadio Mane, according to a report.

The Saints winger has enjoyed another excellent season at St Mary’s, scoring 11 times and providing seven assists in 37 Premier League appearances, and has reportedly been identified by Mauricio Pochettino as a player that could help his side take the next step.

Tottenham eventually finished fourth in the table this campaign, but spent a majority of the second half of the season battling Leicester for the title and Goal claim that Spurs are serious contenders for the Senegal international.

Mane has been a revelation at St Mary’s since arriving from Red Bull Salzburg two years ago and managed to rediscover his scoring touch towards the end of the campaign.

The 24-year-old bagged eight goals in the final eight league games of the season to help Southampton to impressive victories over Liverpool, Tottenham and Manchester City.

Southampton were the in-form side of the final weeks of the campaign and Mane’s role in their excellent run of results has put him at the top of some of England’s biggest clubs’ wishlists yet again this summer.

The winger would expect to collect in the region of £25million and has two years left on his current Saints contract.

Spurs already have a wealth of attacking talent in the their squad, but are somewhat lacking in the winger department, with Nacer Chadli the only real out and out wide man in the side.

United and Liverpool are expected to offer stiff competition for Mane’s signature with Jurgen Klopp identifying the attacker as the alternative to Mario Gotze, should the German decide to stay at Bayern Munich.

In other Tottenham news, Rangers have returned to Spurs in a bid to tie down their defender to another deal at Ibrox.