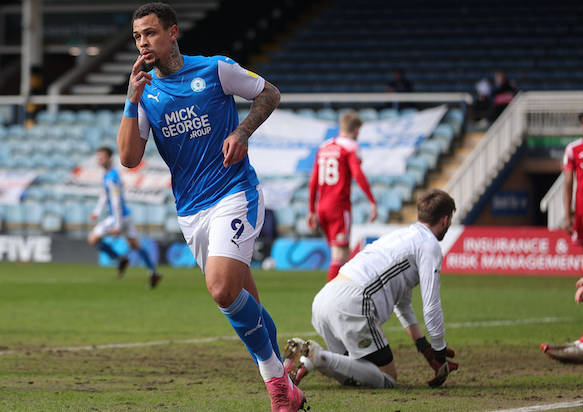 The striker, 26, is one of the most wanted players in the Football League on the back of a 31-goal campaign that has talent spotters flocking to London Road.

A recruitment source has told Football Insider that West Brom scouts will run the rule over Clarke-Harris in Posh’s final two matches of their league campaign including today’s clash against Lincoln City at home.

Darren Ferguson’s side have already secured automatic promotion but there is some doubt as to whether Clarke-Harris will be spearheading the attack in next season’s Championship.

Sheffield United will drop down from the Premier League to the English second tier next season, and are set to be joined by West Brom.

Both clubs are in the market this summer for a proven goalscorer capable of leading them to an instant top-flight return.

Cardiff City and Swansea City are also hot on the trail of the Peterborough star.

This site broke the news last month Rangers had an early interest in signing Clarke-Harris after sending scouts to watch him in action and they will also assess his last two games of the campaign.

Steven Gerrard’s side are assessing potential striker targets to replace Alfredo Morelos if he leaves at the end of the season.

Clarke-Harris is the League One top scorer with 29 goals this season and has been nominated for the division’s player-of-the-year award.

Only Brentford’s Ivan Toney and Cambridge United’s Paul Mullin (both 29) have scored as many times as the Posh spearhead this season in the four professional English league divisions.

In other news, Rangers may be in line for £7million transfer windfall after development.