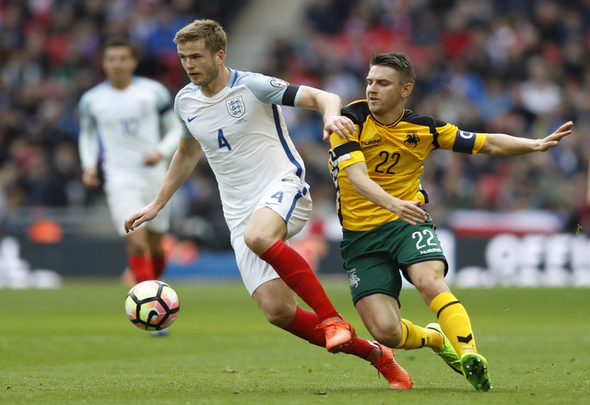 Tottenham enforcer Eric Dier has admitted that Marcus Rashford did not have the best of starts in England’s 2-1 win over Slovakia at Wembley on Monday night.

Manchester United’s Rashford, 19, made a costly error in the first-half which saw Slovakia take the lead in the 2018 World Cup qualifier showdown, in a game which Gareth Southgate’s men couldn’t afford to lose.

However goals from the Tottenham ace and his England team-mate Rashford rescued three points for the Three Lions to keep them in pole position to qualify for next summer’s competition in Russia.

However after the match, Dier, 23, showed that he wasn’t afraid to jokingly criticise Rashford when standing right next to him in his post-match interview.

When asked about the performance of the Old Trafford wonderkid, Dier was shown on ITV Football’s official Twitter account as saying: “It wasn’t so good to begin with but it got better.

“It’s a fantastic show of character to make a mistake for them to score and then to come back and score himself, which was the winner to get us even closer to the World Cup, which hopefully he will shine at as well.”

Reaction: @England's Dier has a joke with Rashford about his performance tonight "It wasn't so good to begin with but it got better!" pic.twitter.com/Jb0kdur2tI

Dier earned his 20th England cap in the win over Slovakia and scored what was his third goal for his country after his near-post strike from a corner got his side back on level terms in the first-half.

The midfield enforcer has been ever-present for Spurs recently and has started all three of their opening fixtures to the new Premier League season.

Mauricio Pochettino’s men return to league action on Saturday when they face a testing trip to Everton.

In other Tottenham news, Dier has admitted that he didn’t like this Spurs player when he first signed for the club.