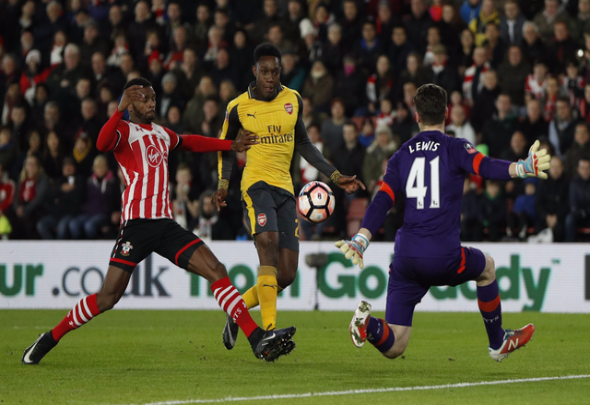 Danny Welbeck has revealed he will not play for Arsenal in their FA Cup clash against Sutton on Monday night – because of the plastic pitch.

Welbeck would have been expected to start the fixture for Arsene Wenger’s team against the non-league side as he continues to build up his match fitness after eight months out with a knee injury.

But the striker, 26, will play no part in the David v Goliath contest because of fears of the impact the astroturf surface could have on his knee.

Welbeck was instead selected for the Arsenal Under-23s against Leicester on Sunday afternoon as he lined up alongside the club’s youngsters for the development side.

“Glad to get 70 minutes today to build up my match fitness,” wrote Welbeck on his personal Twitter account. “Plastic pitch at Sutton isn’t the best idea at the moment.”

Glad to get 70 minutes today to build up my match fitness. Plastic pitch at Sutton isn’t the best idea at the moment. #COYG

Welbeck has made six appearances for the Arsenal senior team since making his return last month following an absence that began last May.

He scored two goals in the Gunners’ 5-0 FA Cup win over Southampton on 28 January, but that is the only start made he has started since his comeback.

Welbeck joined Arsenal from boyhood club Manchester United for £16million in the summer of 2014 but his time at Emirates Stadium has been ruined by two serious knee injuries.

He has scored some crucial goals for the Londoners but has made just 55 appearances in total for the club, which have yielded 15 goals.

In other Arsenal news, a forward has signed after terms agreed on an out-of-window deal.