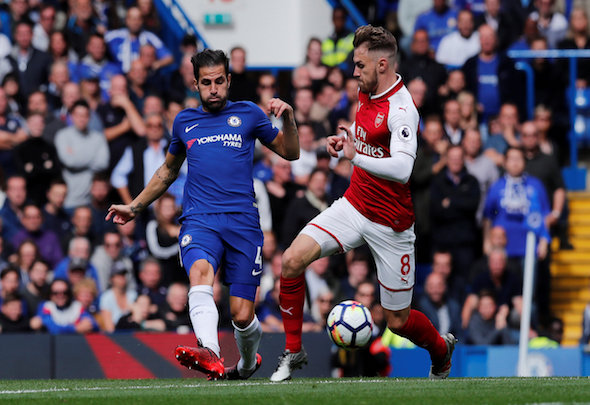 Arsenal manager Arsene Wenger has heaped praise on midfielder Aaron Ramsey and urged him to continue his good form.

The 26-year-old has been outstanding for the Gunners recently, alongside Granit Xhaka in the centre of the pitch.

The Wales international has been scored three times and delivered five assists in 12 Premier League games for Arsenal this season.

Ramsey has struggled with injuries during his time at the Emirates Stadium but has missed just one of the Gunners’ last nine league matches, playing the full 90 minutes in the other eight.

Arsenal boss Wenger was full of praise for the player and is hopeful his form can continue.

“He is an excellent player and very important for us,” said the Arsenal boss as quoted by the Evening Standard.

“Let’s hope he can continue that run because he is a guy who drives the team forward in relentlessly.

“He can go from the first to the last minute and has the engine to do both sides of the game and that is what we want.

Ramsey helped Arsenal to a dramatic 1-0 win over Premier League rivals Burnley on Sunday afternoon, winning an injury-time penalty which was scored by Alexis Sanchez.

Ramsey also added a couple of assists in Arsenal’s 5-0 hammering of Huddersfield on Wednesday night.

Gunners fans will be hoping Ramsey can continue his fine form for Arsenal this season with the club looking to finish in the Champions League places. Wenger’s side missed out on fourth spot to Liverpool on the final day of last season.

In other Arsenal news, Gunners fans have reacted to Wenger’s decision to start this player against Huddersfield.