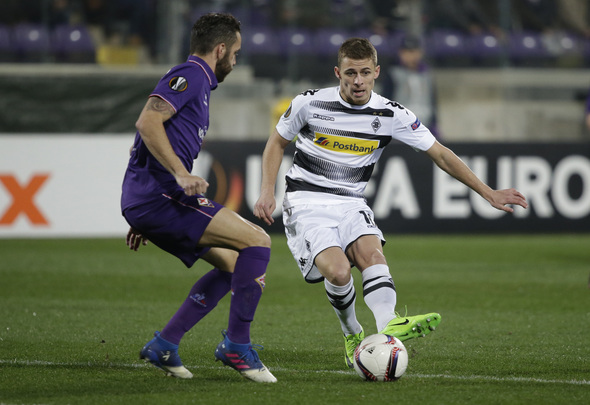 West Ham are interested in Borussia Monchengladbach attacker Thorgan Hazard, according to a report.

French news outlet Foot Mercato claims that Ligue 1 title winners Monaco are also keeping close tabs on the 24-year-old, while Lyon are said to have held talks with his representatives last week.

It is understood that West Ham aren’t the only Premier League team in pursuit of the Bundesliga ace at could face a battle with Stoke and Leicester for his signature this summer.

According to Foot Mercato, the Foxes were plotting a move for Hazard during the January transfer window, in the middle of what was a fine season for the four-times Belgium international.

He made 33 appearances across all competitions for Monchengladbach last term, scoring 11 goals and supplying seven assists despite having his year ravaged by a series of different injuries.

The report says that Hazard’s contract at Borussia-Park has another three years left to run on it after he moved to the Bundesliga in 2015 following a spell with Chelsea alongside his older brother Eden Hazard.

Thorgan Hazard looks like he could be a very good signing for Slaven Bilic, whose side has been desperately short of goals in attacking areas over the last year. The Belgian international can play as a striker, on either wing or in a No 10 role, meaning that his versatility can be very handy should the Hammers suffer another bout of injuries next term. However, it looks as though Hazard can be susceptible to picking up knocks himself, having been sidelined for a total of 18 games last season. Despite this, West Ham should definitely try to bring him to the London Stadium, because he has offered a lot in his game time in the Bundesliga. Hazard can score and supply assists, which would go great alongside a new striker.

In other West Ham news, the Irons are plotting a £50million raid of their Premier League rivals for this attacking duo.