West Ham manager David Moyes is keen to reunite himself with Everton winger Kevin Mirallas during the January transfer window, according to a report.

Moyes replaced former Hammers boss Slaven Bilic on Monday and The Mirror report that he will make a move for the 30-year-old in January if he is shown encouragement by his former club.

Moyes singed Kevin Mirallas from Olympiakos back in 2012 during his 11-year spell as Everton boss. The Belgian international scored nine goals in his only season under the Scot.

The Everton player signed a new three-year contract at Goodison Park earlier this year, but has since fallen out of favour at the club.

He was recently accused of showing a lack of commitment and was allegedly sent home from training by caretaker boss David Unsworth.

The winger has 58 caps for Belgium and has scored an impressive 10 goals for his country.

The reports that the new West Ham boss is interested in bringing Mirallas to the London Stadium will concern some Hammers fans. It would feel like a similar signing to that of Marko Arnautovic, who joined from Stoke for a club record fee over the summer – another Premier League winger who has shown inconsistent form and appears to be past his best. With that being said, Moyes is obviously a fan of the player having signed him as Everton boss and with his future at Goodison Park uncertain, the Belgian international may want to consider his options in the Premier League.

In other West Ham news, Moyes has reportedly lined up this Premier League striker as another potential transfer target. 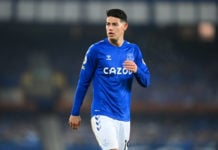