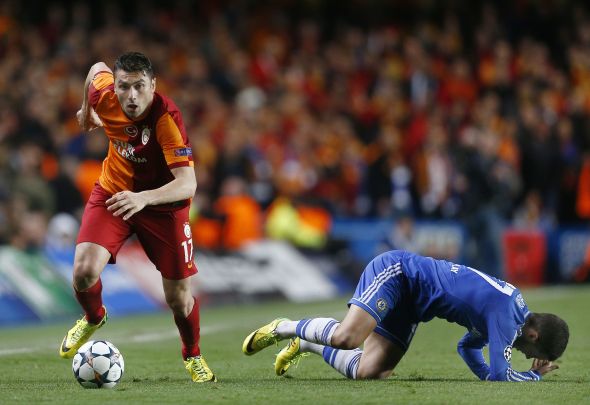 West Ham are ready to reignite their summer interest in Turkish striker Burak Yilmaz, according to a report.

Turkish Football claim that Yilmaz, who currently plays for Chinese Super League club Beijing Guoan, could be looking to leave in the summer and West Ham are ready to offer him an escape route.

This comes after Sky Sports claimed in the 2016 winter transfer window that the Hammers were interested in 31-year-old forward Yilmaz, who opted to leave Galatasaray for China over the east London outfit.

However, Yilmaz’s stay in the far east is under threat following the signing of RedBull Salzburg’s Jonathan Soriano, with Chinese clubs only permitted to have three foreign players in their starting line-ups.

Manager Slaven Bilic will know Yilmaz from his two-year spell as manager of Besiktas. Yilmaz scored against Bilic’s former side in a 2-0 Galatasaray win in January 2015.

The goal machine has scored wherever he has been, with 168 goals in 352 appearances – a better than one in two record that West Ham would love to have on their books.

With Andy Carroll the subject of three reported Chinese Super League offers, Yilmaz could be heading the other way to the London Stadium to replace the injury-prone target man.

The Hammers are, no doubt, in need of a new striker as flop signings Simone Zaza and Jonathan Calleri have failed to provide top-quality cover for the likes of Andy Carroll and Andre Ayew. Although prolific in Turkey and China, Bilic must be aware that the majority of his summer signings from overseas clubs in the summer have failed to produce. The likes of Gokhan Tore, Havard Nordtveit and Arthur Masuaku have found the going tough in east London, and therefore the signing of Yilmaz must be considered a last resort. Scouring the market for other alternatives should be completed first in West Ham’s striker search, before looking to sign Yilmaz ahead of the 2017-18 season.

In other West Ham transfer news, this is why the Hammers should look to make a summer move for this Belgian striker.