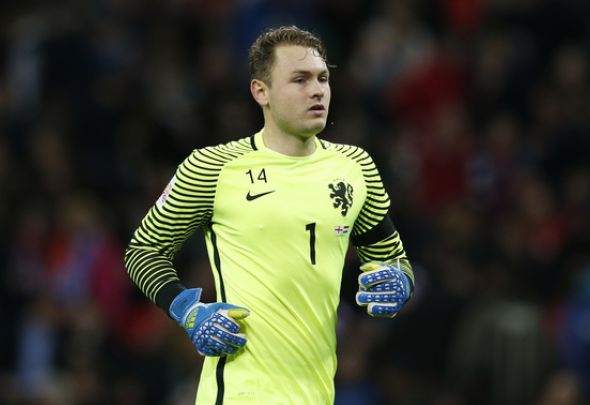 West Ham have lodged a bid worth £2.8million for PSV goalkeeper Jeroen Zoet, according to a report.

Dutch news outlet Voetbal International claims that the Hammers are the only team to have made a “concrete” offer for Zoet, 26, with their seven-figure offer as they look to find a back-up option to Manchester City loanee Joe Hart.

Zoet has previously admitted, as quoted by Voetbal International, that an exit from PSV has “unfortunately” been “blocked” by the Eredivise club, suggesting that with West Ham being the sole bidders, their offer was turned down.

It is understood that the nine-times Dutch international is being eyed up by Slaven Bilic to replace Adrian as playing second fiddle to Hart, but because the Spaniard has not been moved on yet, a deal for Zoet has not materialised.

However the report adds that PSV are expected to have a couple of “hectic days” in the run up to transfer deadline day, so there could still be some hope for the Hammers of landing their man.

Zoet is very much the No 1 goalkeeper at PSV, having started all of their fixtures in the early phases of this season, as well as appearing 37 times across all competitions last term.

If Adrian is happy to stay at the London Stadium then West Ham don’t really need to spend money on getting in another goalkeeper. The Spaniard was unhappy earlier this summer when co-owner David Sullivan made a comment about Hart being the best goalkeeper he’s ever had, but since then nothing has come to light about a potential move away from the club. Zoet would be a good capture for the Irons. He’s experienced at international level and plays regular in European competitions, but in a World Cup year, he may feel that staying at PSV will give him the best chance to play for the Netherlands in Russia next summer with a guaranteed No 1 spot.

In other West Ham news, having passed his medical at a European giant, the Hammers are looking to hijack a move for this defender after his transfer stalled.