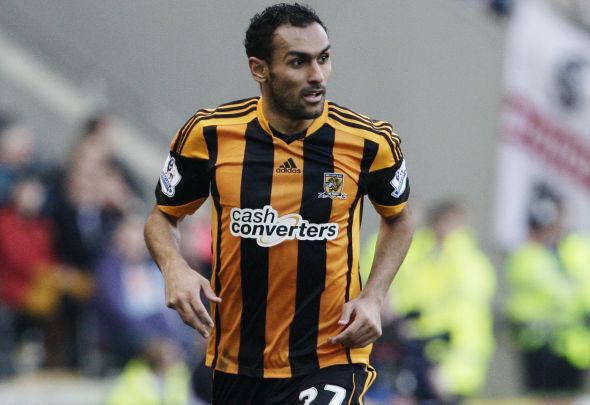 West Ham could finally end their right-back woes with the signing of Hull’s Ahmed El Mohamady, according to a report.

The Telegraph claim that the London Stadium is one of three possible destinations for the 29-year-old right-back, with Premier League rivals Watford and Stoke also interested.

El Mohamady could be looking to jump ship from struggling Hull, as they continue to struggle in their fight to avoid Premier League relegation.

The Egyptian international is set to jet off to represent Egypt at the African Cup of Nations and could look to strike a deal before leaving, in order to end a relegation dog fight when he returns.

With 151 Premier League appearances at Hull, El Mohamady could be seen as the man to end Slaven Bilic’s right-back headaches.

Former Leeds ace Sam Byram has been sidelined for almost the entirety of the season after tearing his hamstring against Middlesbrough in October, while Alvaro Arbeloa has failed to impress since his free transfer from Real Madrid.

It has seen Bilic use Michail Antonio at right-back, before moving summer signing Havard Nordtveit from central midfield to the right side of defence.

With West Ham’s obvious woes at right-back, bringing in a player with plenty of Premier League experience will only benefit the Hammers in the long run. El Mohamady will want a move to the London Stadium with Hull’s current state unlikely to get any better, and the Hammers could look to profit on that in the coming month. Known for his superb crossing ability, Hull’s number 27 could be the man to bring the best out of target man Andy Carroll as Bilic looks to find the best way to fire his team out of a potential relegation battle. However, it remains unclear how much the right-back will cost the east London outfit with three years still remaining on his Hull contract.

In other West Ham transfer news, the Hammers are also interested in this Premier League star ahead of a potential January move.