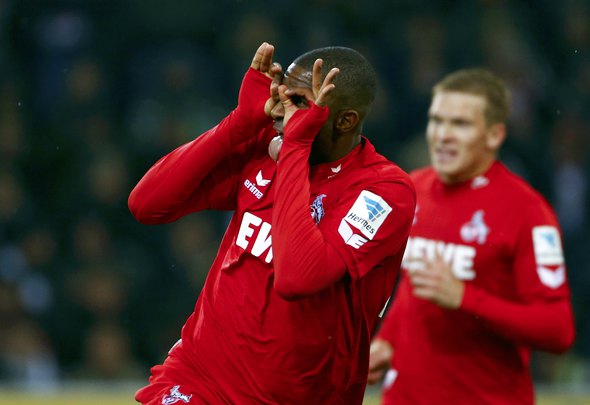 West Ham have tabled a bid for Cologne striker Anthony Modeste, according to a report.

The Telegraph claims that the offer made by the Hammers was a club record total of £22million, which beats the amount spent on Andre Ayew in his £20million move from Swansea last summer.

However, it is understood that Bundesliga club Cologne have rejected West Ham’s eight-figure offer as they rate Frenchman Modeste as worth at least £35million, despite him being aged 29.

The European striker scored a stunning 27 goals in 37 appearances across all competitions, which explains the Irons’ desire to sign him.

The Telegraph has also reported that West Ham have had a similar bid of £22million turned down by Villarreal for Cedric Bakambu.

The 12-times DR Congo international wasn’t as prolific as Modeste last term, as he scored 11 goals in 34 appearances in all contests – which is still more than Slaven Bilic’s current strikers Andy Carroll and Diafra Sakho managed.

Hammers co-owner David Gold has recently put it on record that he wants to bring a new striker to the London Stadium this summer after injuries ravaged Bilic’s squad last term.

The London club clearly see Modeste and Bakambu as two players that could put an end to their worries in front of goal.

West Ham are clearly desperate to bring in a proven goal scorer this summer. They have been in pursuit of Modeste for some time now, but Cologne’s £35million valuation of the player is quite ridiculous when you consider his age and when you look at the fact his former spell in the Premier League with Blackburn proved fruitless. Bakambu seems a more realistic target as it’s doubtful Villarreal will demand much more than the £22million already offered. It’s surprising that they turned down that offer, but a part-exchange or bumping that figure up to £25million could twist their arm.

In other West Ham news, Stan Collymore believes that the Irons should sign this England international to sort out their attacking woes.