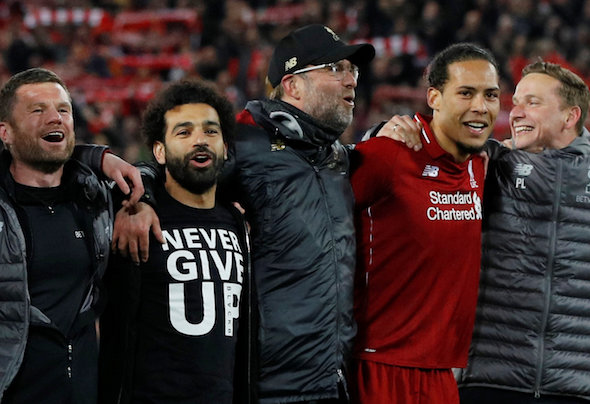 Danny Mills has claimed Jurgen Klopp is one of the two best managers in the world along with Pep Guardiola.

Speaking exclusively to Football Insider, the former England defender insisted the Premier League title-chasing duo are in a category of their own when it comes to the elite coaches.

Liverpool and Manchester City have been locked in a remarkable title race that reaches its finale tomorrow (Sunday), with Guardiola set to secure his second consecutive crown if his side win at Brighton.

Klopp has overseen a remarkable 94-point tally this season as well as taken Liverpool to the Champions League final for a second consecutive campaign following Wednesday’s remarkable win over Barcelona.

“Klopp and Pep are the two standout managers in the world,” Mills told Football Insider. “They have built Liverpool and Man City into the two best sides on the planet. Who can rival them?

“The Liverpool players clearly adore Klopp. They respect him massively, he has created an incredible team spirit and he looks after his players.

“He laughs, jokes, doesn’t take himself too seriously and is media friendly. There’s no doubt he’s one of the best managers of the Premier League era, along with Guardiola, Sir Alex Ferguson, Arsene Wenger when he was at his peak, and Jose Mourinho in both his spells at Chelsea.”

Liverpool host Wolves in their final Premier League match of the season at Anfield on Sunday.

They will beat City to the title if they win and Guardiola’s side either draw or lose at Brighton.

In other Liverpool news, Danny Mills has claimed Reds ace looks after himself “even better than Cristiano Ronaldo”.