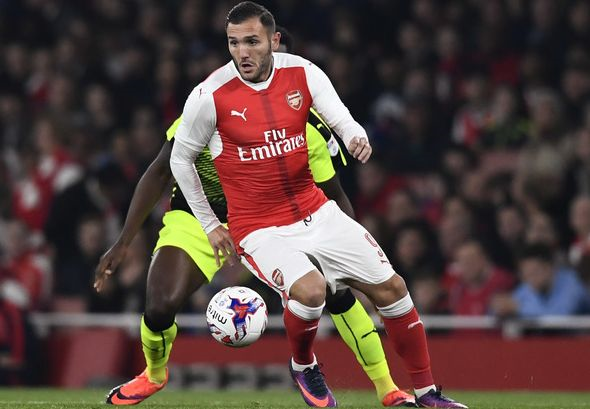 West Ham should attempt to sign Arsenal forward Lucas Perez amid speculation that he is ready to leave the Emirates Stadium in the summer.

Rodrigo Fernandez Lovelle, who is Perez’s agent, has told Calciomercato that the 28-year-old has plans to leave the Gunners at the end of the season.

It is understood that the striker has grown frustrated with limited opportunities following his arrival from Deportivo, with Lovelle claiming Perez wants to leave ‘at all costs’.

Perez move to Arsenal in the summer transfer window from £17.1million from Spain, but has been unable to establish himself in the starting line-up under Arsene Wenger.

The attacker has completed 90 minutes in just five of his 17 appearances for the north London club and has played a bit-part role.

However, he has still managed to impress the Arsenal supporters despite his lack of game time and many of them are frustrated with his opportunities.

West Ham should pounce to sign the forward off their London rivals as he would be a great addition to their squad.

The Hammers currently have Andy Carroll as their main attacking option, while Michail Antonio is also proving his worth in a more advanced role this campaign.

They should compete for Perez’s signature in the summer if he forces a move away from Arsenal and would be offer to able regular football.

Perez has still managed six goals and supplied five assists for the Gunners despite his lack of play time, but is constantly snubbed by Wenger.

Bilic could be the manager to bring the best out of the Spaniard and he would certainly fill a huge gap at the London Stadium.

In other West Ham transfer news, the club are eyeing a third bid for a Ligue 1 sensation.