Rangers have clear issues in their defence that Steven Gerrard and Mark Allen must address in the summer.

While the Gers have been able to find the net easily, the same can be said about teams who have played against them with the 5-5 draw at Hibernian on Sunday proving that it should be a top priority for the club in the coming months.

One defender that the Light Blues must look at to solve this issue is Deportivo La Coruna enforcer Fabian Schar, who is reportedly available on a cut-price fee after his side were relegated from La Liga.

Swiss news outlet Blick has claimed that Schar, 26, has a £3.5million release clause in his contract that has now been triggered after Deportivo suffered the drop.

That led to  El Desmarque reporting that Celtic were looking to sign the Switzerland international in the summer as Brendan Rodgers aimed to improve his defence.

Schar would have been a solid addition for the Hoops, let alone Rangers, but the Daily Record claimed in their live transfer blog on Tuesday [08:56am] that Rodgers is in factnot looking at signing the centre-back, which is a real surprise.

With Celtic out of the way, that should leave Rangers to seal a swoop for Schar in the summer.

The former Basel defender has bags of international, Champions League and top-flight experience that would make him more than good enough for Gerrard at Ibrox.

In other Rangers news, this £50,000-a-week boyhood Gers fan has dropped a major hint on his future after it was reported that the Light Blues want to sign him. 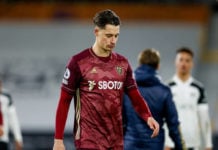