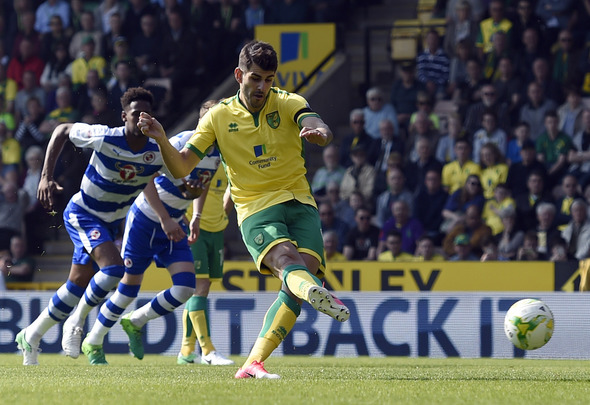 Wolves are closely monitoring the situation of striker Nelson Oliveira at Norwich, according to a reliable journalist.

Mirror reporter Alex Richards claimed on his personal Twitter account in the early hours of Sunday morning that the Wanderers are set to keep watch of the 26-year-old when Norwich welcome Sunderland to Carrow Road this weekend.

Wolves set to watch Nelson Oliveira on Sunday. Told they're again keeping tabs on his situation at Norwich. #WWFC

Oliveira caused a stir last weekend when he came off the bench to score in the 1-1 draw at Fulham as he proceeded to celebrate intensely in front of manager Daniel Farke, seemingly making the point that he should be starting.

The 16-times Portugal international was in and out of the Norwich squad last term, but still managed to score 15 goals and supply five assists in 32 appearances across all competitions despite starting just 16 Championship fixtures.

Oliveira began his career at Benfica and after a series of loan spells, he signed a four year deal at Carrow Road last summer.

Wolves have done a lot of strengthening this summer but they could still do with making one more addition up front. Oliveira has proved that even with reduced game time he can be a lethal goal scorer in the Championship and he could be the perfect back up to Leo Bonatini, who got himself off to a good start in the gold and black with a goal against Middlesbrough last week. Oliveira would fit in perfectly with the Portuguese contingent that are already at Molineux, as well as Brazilian Bonatini and manager Nuno, who seems eager to bring in more of his fellow countrymen this summer. Wolves have made a good start to their Championship campaign and adding Oliveira to their squad could see them making a good case for promotion.

In other Wolves news, the club have made an emphatic decision on an offer for this 24-year-old Molineux star.