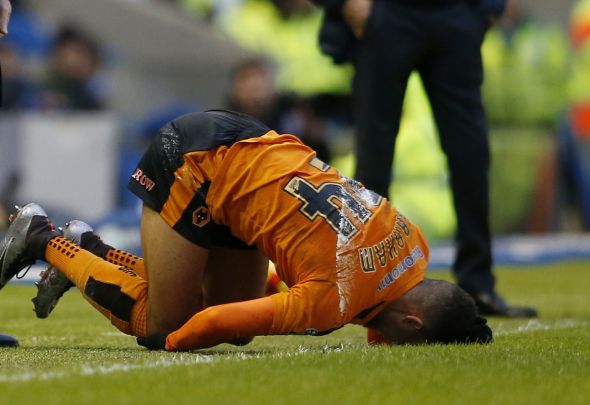 Wolves’ flying winger Jordan Graham has revealed that he is close to returning to full fitness after injuring his knee last season.

The 21-year-old broke into the Wolves side last season, making a total of 13 appearances before tearing his anterior cruciate ligament against Cardiff in January.

However, the former England Under-17 international gave Wolves fans a boost via his personal Twitter account, announcing that there is “not too long left now”.

Ready to hit the rehab hard again tomorrow after a nice little break! Not too long left now! #GodWilling 🙏🏾 pic.twitter.com/wnOD7RNKLO

Graham, who signed for Aston Villa when he was just seven years old before moving to Wolves last summer, has developed a reputation of being injury prone.

A loan spell before he joined Wolves permanently was riddled with injuries, which prevented him from making a single appearance.

However, ex-manager Kenny Jackett had faith in Graham, and signed him on a permanent deal. A short loan spell with Oxford United seems to have helped the Wolves number 11 regain his fitness, but after returning to Molineux the knee injury ended his 2015-16 campaign.

Wolves return to action this weekend against Championship newcomers Burton Albion, as Zenga’s side look to bounce back from their last outing, a 1-0 loss to
Huddersfield.

In other Wolves news, this experienced defender is set to be sidelined until the new year.