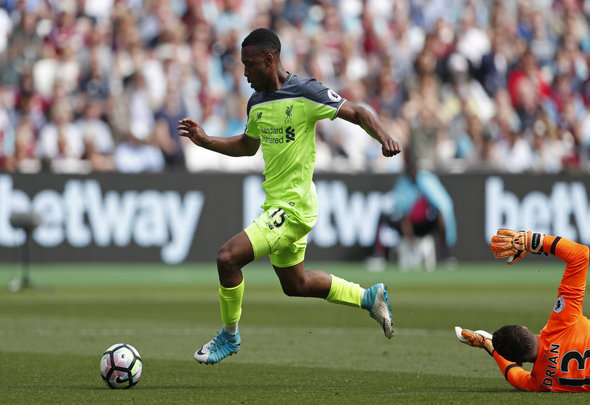 Sturridge made his first start since January at the London Stadium and he capped it off by scoring the Reds’ first goal of the afternoon.

Philippe Coutinho, who assisted Sturridge, then added a further two and Divock Origi bagged their fourth of the afternoon to hand Jurgen Klopp’s side an all-important three points.

Sturridge has struggled with injuries all campaign, and it was only his sixth start in the Premier League.

Overall this season he has scored seven goals in 26 appearances in all competitions.

However despite that average return, Lovren was keen to heap praise on the striker after his performance versus the Hammers.

The Croatian told Liverpoolfc.com: “Sturridge is, I would say, a world-class player.

“He doesn’t need many chances. When he gets a chance he will score and he showed again today that he’s one of the best strikers.”

The victory meant the Reds moved above Man City into third in the Premier League, with just one game left to play.

If Liverpool can come out on top in their final match against Middlesbrough at Anfield, a top-four finish will be secured, and with it Champions League football for next season.

Lovren has been a mainstay in Klopp’s back line this term and has played 32 league and cup games.

In other Liverpool news, Jermaine Jenas has heaped praise on this Reds 24-year-old.