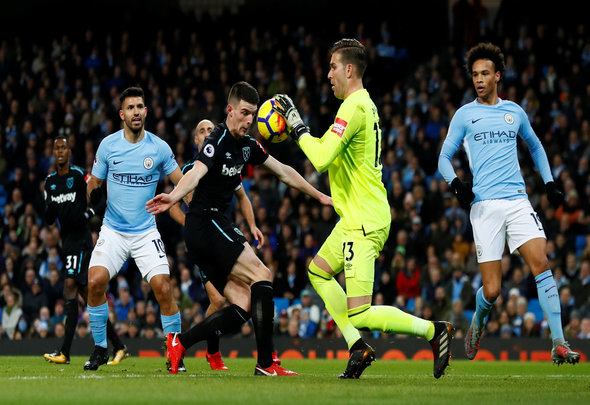 West Ham United goalkeeper Adrian has revealed that he was angry the club did not allow him to depart in the summer when Newcastle United were lining up a swoop.

The Spanish shot stopper, who has been a regular in the Premier League since arriving at the east London club, found himself dropped to the substitutes’ bench to act as understudy for Joe Hart, after the England goalkeeper joined on a year’s long loan deal from Manchester City.

Seeking regular playing time, he revealed he was looking to leave the club for his own loan spell, and stated that he was left raging that they chose not to let him depart, with the likes of Premier League rivals Crystal Palace and Newcastle ready to pounce.

However, having been restored to the first team for the last three of the Hammers’ matches, the 30-year-old says he is feeling much better about remaining at the London Stadium, as he looks to add to his 129 outings for the club.

He told Spanish publication Marca on their website: “He (ex-boss Slaven Bilic) told me that Joe was going to be number 1 and in the first three months, without playing in the league, I had a very bad time, I was frustrated.

“The worst moment was when I wanted to leave on loan in the summer – Betis, Deportivo, Newcastle and Palace probed – and they did not open the door for me

“I wanted to vindicate myself, to show that I am still at a great level. The coach (new manager David Moyes) showed a lot of personality by giving me a starting role.”

Newcastle boss Rafael Benitez was said to have been on the hunt over summer for a new senior goalkeeper, and current shot stopper Karl Darlow revealed that had it not been for one of the Magpies’ moves falling through, reported by the Chronicle to have been Adrian, he would have been on his way after agreeing on a move to Middlesbrough.