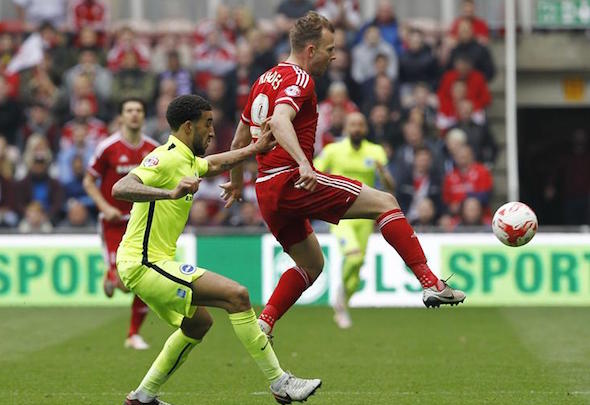 Aston Villa are facing a late battle with Sheffield Wednesday for Middlesbrough striker Jordan Rhodes, according to a reliable journalist.

The Mail reported on Monday that Villa had reignited their bid to sign the 26-year-old after struggling to make an impact on the Premier League.

But, Sheffield Live TV journalist Alan Biggs has reported on his personal Twitter account on Monday evening that second tier rivals Wednesday are also in the race.

Biggs shared that both clubs are prepared to go to a figure of around £5million for Rhodes, but that he may be in favour of a move to Sheffield Wednesday.

My #swfc sources say they've been prepared to go to half (around £5m) on Rhodes. Villa similar & maybe more muscle. But JR may prefer S6…

Rhodes had previously spent three years in Yorkshire with Huddersfield between 2009 and 2012, while Sheffield is a considerably shorter distance away from Middlesbrough than Birmingham.

However, Biggs did share that Aston Villa may hold more muscle than Wednesday and the Midlands giants have not been scared to pay out huge sums of money since their relegation last season.

The club spent a combined £27million on securing Jonathan Kodjia and Ross McCormack in the summer and they may show their strength in the market again for Rhodes, who has 91 goals in 189 Championship matches.

Rhodes would be a very good signing for Aston Villa, but he would also be very much a short-term signing for a club who have aspirations of reaching the English top flight. The striker is good at getting in the right positions in the English second tier and can poach goals, but his all-round game is stopping him from making the step up to the Premier League and that is why he has ultimately struggled to get in a Middlesbrough side who are crying out for goals. However, Villa’s main focus right now is making a return to the Premier League and Rhodes would certainly take the pressure off Kodjia in the team to find the all important goals. Therefore, the Midlands giants should look to sign the striker, but anything over £5million and they must walkaway.

In other Aston Villa transfer news, this midfielder is set for a medical after Villa agreed £5million fee.