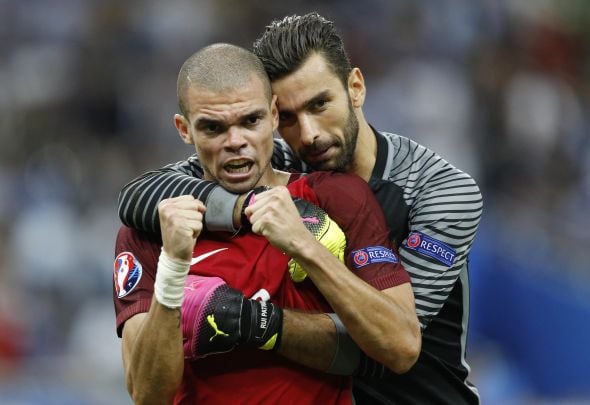 The Portuguese star had an exceptional Euro 2016, and UEFA named him in their official team of the tournament alongside team-mates Pepe, Raphael Guerreiro and Cristiano Ronaldo.

The Sun claims that Everton are on red alert after it emerged that Patricio is desperate to come to the Premier League.

The report claims the goalkeeper would be able to leave Sporting for £6million, as Everton search for a replacement for long term No.1 Tim Howard.

Howard left at the end of last season and Koeman seems eager to make a new signing, with doubts surrounding the ability of Joel Robles.

Patricio, 28, has been with the Portuguese giants since a junior and signed his contract with the first-team in the summer of 2006, with his current contract set to run until 2022.

Earlier on Sunday, it was reported that Everton were targeting Leicester keeper Kasper Schmeichel but it appears Koeman is keeping his options open.

Koeman has already boosted his goalkeeping options once this summer by signing Maarten Stekelenburg, 33, from Fulham.

In other Everton news, Darron Gibson as questioned the fitness of the Everton squad and has highlighted where they must improve.