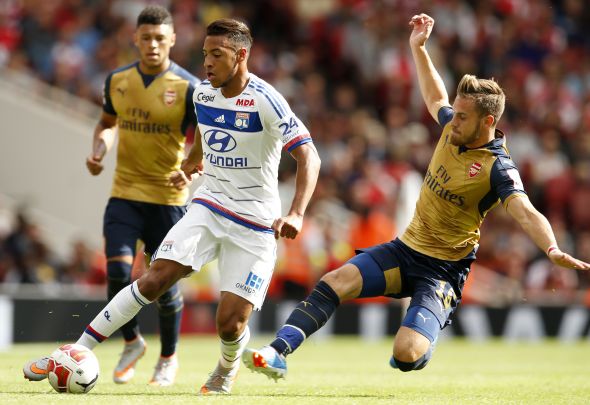 Corentin Tolisso’s goalscoring midfield form could be the key to pushing Tottenham one step further and holding the Premier League title aloft, if signed in the summer.

French newspaper L’Equipe (April 20) claimed in their paper edition that Spurs were keen to sign the 22-year-old, but were behind Juventus in tracking the goalscoring midfielder.

It is not the only Ligue 1 midfielder Spurs are reportedly interested in, as The Guardian claim Spurs and Arsenal are also keen on Nice midfielder Jean Michael Seri.

Lyon midfielder Tolisso has shined in France’s top tier, scoring 14 goals and laying on a further six assists from midfield during his 46 league and cup appearances this term.

Spurs currently have Mousa Dembele, Eric Dier, Victor Wanyama and Harry Winks in central midfield, but the quartet have managed just 10 goals from the middle of the park.

Without a stem of goals or creativity from midfield, Mauricio Pochettino has relied on his attack to fire Spurs towards a title challenge this season.

Bringing in Tolisso could remove some of the pressure  on the likes of Harry Kane, Christian Eriksen and Dele Alli, and allow Spurs to find the back of the net from all over the pitch.

Producing creativity from deep would also give Pochettino’s side more freedom and could even help Alli, Kane and Eriksen produce even better form next time round.

With Spurs competing in the Champions League and in a strong financial situation, Spurs should look to splash out on the young midfielder who is not even approaching the prime of his career.

However, the one-time France international has more than three years remaining on his current contract, and that could see his price tag rocket.

Since his debut in August 2013, Tolisso has made a huge 159 Lyon appearances in all competitions, scoring 29 times and adding 16 assists for the French outfit.

In other Tottenham transfer news, Spurs are braced for a triple swoop as Daniel Levy’s resolve is set to be tested.