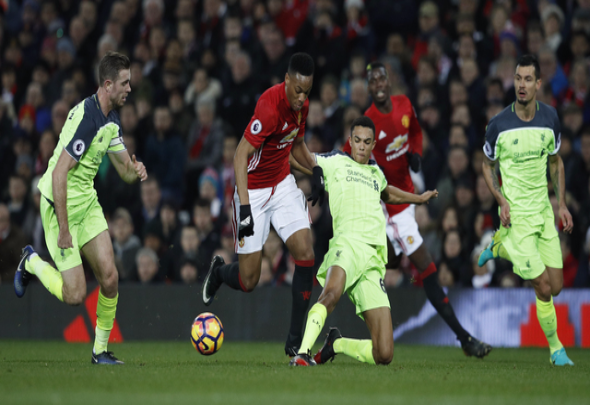 The 18-year-old right-back was handed his first Premier League start against Manchester United with Nathaniel Clyne missing the clash with a rib injury.

He was tested against the more experienced Anthony Martial and Juan Mata down his flank, but he battled well in a good display for his age.

Meanwhile, £89million world-record signing Pogba failed to impress in the rivalry clash, even giving away a penalty in the first half which saw James Milner duly convert.

This lead to former Reds ace Beglin stating on his personal Twitter account after the match that Alexander-Arnold looked worth a lot more than the pricey Pogba.

The match at Old Trafford on Sunday ended in a 1-1 draw with Milner’s first half penalty cancelled out by a late Zlatan Ibrahimovic goal.

However, many supporters, including Beglin took to social media to hail the performance of their young starlet in a clash which would see many falter.

Alexander-Arnold will now be eager to see more match time as he looks to break into the Reds’ first team.

The Merseyside giants have an FA Cup replay away at Plymouth coming up next on Wednesday with a clash against bottom of the league Swansea coming up afterwards on Saturday.

In other Liverpool news, Jamie Carragher reacted to Simon Mignolet’s display against Manchester United on Sunday.